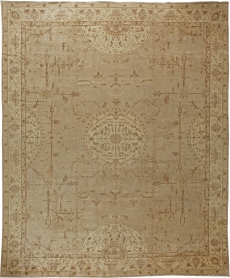 The beauty of Turkey is surpassed only by the superb quality of its carpets, a living tribute to the skilled weavers who labor to create these works of art. Carpet or rug weaving began in villages and towns in Central Asia and the Middle East about 3,000 years ago. Turkey most eminent carpet weaving techniques are still used today in making the most sought-after rugs in the market today.

An antique Borlou rug, for instance, has contrasting coloration such as royal blue, terracotta pink, acid yellow, and deep, dark reds which cannot be found in other rugs of similar material or weave. Easily distinguishable from their Persian or even Caucasian counterparts, Turkish rugs use a double knot, a classic feature that has become their signature. Creations by weavers from the Eastern Anatolian region tend to be colorful and bold, for example, while subdued designs characterize those from the city of Usak in Western Anatolia, seat of major rug manufacturing from the days of the Ottoman Empire until the early years of the 20th century.

In the early 1800s there was a momentary decline in demand for Turkish rugs and carpets due to the proliferation of the Savonnerie, Axminster and Aubusson types produced in Europe which led to a vacuum in the availability of skilled weavers trained in the traditional art of Turkish knots, making it necessary to scour neighboring villages for people who could turn out the same top-grade rugs as in days of yore. In the late 19th century, the city of Usak became the center of carpet weaving once more, with some adjustments to its traditional design; the familiar arabesque and medallion designs woven into more geometric shapes, in a pattern that included Mediterranean pastels.

Today, these woven creations from Usak are exported worldwide and the fact that their knot counts are lower than those of antique Persian carpets has not kept them from being the top choice of many interior designers. The wide range of their sizes, color palettes and intricately woven spandrels have made Borlou rugs and carpets from Anatolia the preferred decorative element of museums, hotels, major businesses and fine residences the world over.