History and Design of Borlou Rugs

Borlou rugs originate in Turkey. They have been handmade since as early as the 13th century. It is believed that a tribe known as the Seljuks were the skilled weavers responsible for these early masterpieces. The Seljuks are said to have hailed from Central Asia and were nomads.

During the 1400s and 1500s, Europeans collected and treasured these rugs so much so that all rugs that came from Asia were thought to be products of Turkey. Each rug bears the intricate designs that represent the weaving base that produced it. Each region in Turkey has a signatory design that identifies it. The following are some of the regions and their associated designs:

– Hereke: This weaving center is located near Istanbul in the northern tip of Izmit Bay. These rugs were reserved for royalty and people held in high esteem on the national and international front. They incorporated motifs from Persia, traditional Turkish designs, Egypt, Western Europe, and of course the Usak medallion. These rugs are considered to be the finest in the world.

– Konya: It is located in Central Anatolia. The rugs produced here also have a Persian flavor as well as a floral motif. Marco Polo once commented on the beauty of the carpets produced in this region.

– Sivas: These carpets incorporate the Usak medallion, have a Persian flavor, and tend to be more floral.

Ghiordes is the oldest knot found in the most ancient of rugs/carpets. However, the oldest fragment of rug found with this knot was discovered in Siberia amongst the remains of the Pazyryk people and has a date stamp that places it in the Iron Age.

An Exceptional Collection of Borlou Rugs and Carpets for Sale 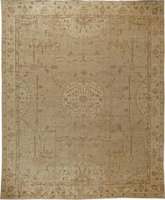 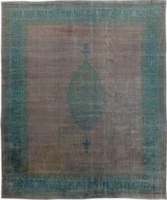