During the Islamic occupation of the eleventh century, Medieval Spain was the first European country to make knotted pile rugs. The Hispano-Moresque society was a tremendously cultured civilization with diverse populations: Muslim Arab, Jewish, Christian and Berber, all intermingling for many centuries. In addition, other prevailing design influences came from Persia, Italy, and France. Along with tapestries, cushions, bed sets and chests, oriental style rugs were indispensable to the nomadic life of the Spanish nobility. In the fifteenth century, geometrically patterned Spanish  rugs and carpets from Alcaraz were embellished with figural panels and emblazoned with armorials of the noble patrons who commissioned them. Throughout the Renaissance, Spanish carpet and rug making closely followed the prevailing trends of European fashion by incorporating bold wreath and trellis-work designs.

Retaining the idiosyncratic structure of the Spanish knot, early Hispano-Moresque rug weavers employed the method of a single-warp knot in their carpets. The original bright red and blue colorations of these antique Spanish rugs have faded over time into the muted gold and blue tones now associated with antique Spanish carpets. Neoclassical and Turkish influenced pieces were made in the workshops of Quenca. In 1712 Charles III founded the Real Fabrica de Tapices Manufactory in Madrid and produced European style carpets to compete with the sophisticated French workshops of Aubusson and Savonnerie.

An Exceptional Collection of Spanish Carpets for Sale 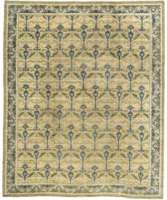 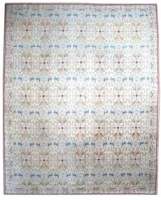 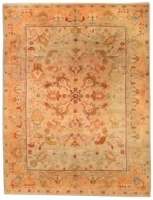