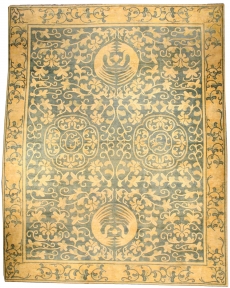 There are many styles of antique oriental rugs that are rooted in the many cultures of Asia but within this category one of the most appreciated is the Ikat. In the streets of 18th Century Central Asia, just as it does today with men and women, a man’s clothing defined his status in society and proclaimed his wealth. And in that person’s home an Ikat, a textile of bold, original design and vibrant colors would confirm their status and wealth. These antique textiles, the carpets worth many thousands of dollars, are valued not just for their antiquity or investment value but for the true art that created them.

Among antique oriental rugs, Ikats took as great a skill as any to produce; skill in a process that in some respects is similar to tie-dying. To make the design each thread has to be individually bound to resist the dyes. This delicate procedure was repeated over and over again until the threads were ready for weaving. In the minds of the ancient cultures the very procedure that created these textiles; the method of dying and weaving, the symbolic motifs used in the designs and the necessity of needing specially trained crafts people, imbued the carpets with magical powers.

The art of rug and carpet making in Asia goes back beyond recorded history as in the earliest Chinese scrolls from the T’ang period these beautiful textiles were already apparent. Standing out in their designs are the ancient symbols of lotus blossoms, chrysanthemums, clouds, foo-dogs and birds. Some of these are Buddhist in origin, for instance the conch shell is meant to represent the Buddha calling one to prayer and the ethereal water or cloud would represent the universe. Not all the motifs had a Buddhist provenance but its influence is commonly found in much of Asian design over the last two thousand years.

Though many of these antique oriental carpets are made with silk, in Chinese occupied and surrounding area of ancient China a type of rug called a Samarkand was common. Samarkands are usually long, narrow rugs made from wool or a wool and silk mix which are unique in the use of bright red and yellow in their simple designs. Tibet has recently recommenced its historic craft of rug making where the rugs are made by a technique of hand knotting the threads.

The antique rugs in contemporary rug collections are sometimes too fragile to use but instead are bought, hung and appreciated as pieces of art by the modern equivalents of monarchs or emperors of the past. The successful modern collector with a taste for the unique will be drawn towards antique oriental carpets for their beauty and preciousness. And where a great Chinese emperor may have had a carpet especially woven for a particular position in the Forbidden City, a modern collector might display the same silk carpet with all of its auspicious symbols, for their aesthetic enjoyment while still using it as a mark of prestige and status.