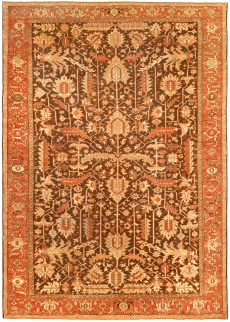 The quality and aesthetics of village rugs lie somewhere between rugs produced in city workshops and those woven by nomadic tribes all over the world. Over time, some nomadic tribes began to settle on the periphery of cities or villages and thus pick up some of the techniques and designs of the larger workshops. The casual rug weaving of the tribes blended with the formal strict city rug industry giving village rugs their own unique style.

Village rugs are coarser than city rugs and are produced without use of a cartoon. Also contributing to their distinct appearance is the fact that, while they are woven on vertical looms like city rugs, they integrate nomadic motifs. Village rugs are produced by a head weaver who leads a team of subordinate weavers according to his design. The patterns used in the village rugs are more angular than the more sophisticated floral imagery found in city rugs. Color variation is also more drastic in these rugs ranging from subtle shades to dramatically darker tones.

Village carpet-weaving is a venerable traditional trade often handed down from generation to generation. Some of the major village carpets popular in the international markets include Bakshaish, Heriz, Serapi, Bakhtiari, Malayer and Serab. These genres of village carpets are in demand for their less formal decorative designs and availability in large room sizes.

Among all these, the Serapi and Bakshaish carpets are the most sought after. Despite rapid industrialization of the carpet industry, village carpet production is still a significant segment of the market due to their charismatic appearance, attracting large numbers of customers from all across the globe.