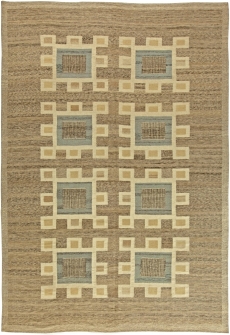 Scandinavia has long been associated with rug weaving. The region is known for the quality of rugs produced there. They are definitely on par with Chinese and Persian rugs. For centuries Scandinavian rugs have been hand crafted by weavers in Norway, Denmark, Sweden and Finland. In the present rug market, contemporary Scandinavian rugs are very popular. These types of carpets are favorites among area rug enthusiasts. Swedish rugs deserve special mention as they are attributed for their versatile designs contributed by professionals like Marta Maas-Fjetterstrom.

The History of Scandinavian Rugs

The history of rug weaving in Scandinavia is not as simple as other parts of the world. Rug making is more correlated to the cultural spread rather than being an art form in the region. The weavers here were highly influenced by the Asia Minor and Anatolia rug makers like their European counterparts. The increase in the demand for Scandinavian rugs in the Byazntine Empire paved the path for the manufacturing of very fine rugs.

Rug making in Scandinavia was introduced later than other parts of the world. Artisans there took rug weaving to a whole new level. They became notorious for crafting very high quality rugs. Rya rugs are a fine example of how these weavers took the art of carpet weaving to new heights. These rugs had symmetrical Ghiordes or Turkish knots which were embedded into a backing that was specially woven with small holes. These holes allowed the weavers to insert knots at even spaces using a tapestry needle.

You will find the works of Marta Maas-Fjetterstrom simply irresistible in the vintage Scandinavian rug category. They have ruled the market for last 70 years. After her death the demand for these rugs increased drastically. Also the contribution of artists like Barvro Nilsson, Ann-Mari Forsberg, Marianne Richter, along with some others have created a great deal notoriety for Scandinavian carpets.

The Blended Beauty of Contemporary Rugs

Cotton Carpets to Suit Every Taste