Anyone who watched Disney’s ‘Aladdin’ remembers the magic carpet used by the title character. As a method of transport, carpets appear most often in Middle Eastern tales, with the most notable example being ‘One Thousand and One Nights’.

In one of the stories, prince Husain acquires a magic carpet in Indian city of Bisnagar, which teleports its user rather than makes him fly. However, enchanted rugs have, in fact, appeared in the legends and myths of numerous nations and not always as fables.

The king Solomon, known from the Bible, was famous not only for his wisdom, but also a glorious flying carpet. Made of green silk with golden weft, the carpet was sixty miles long and just as wide. The Jewish sage, Ben Sherira, gave two different versions on how the king got his hands on such a magnificent treasure. The first account claims that the Queen of Sheba, who also appears in the Bible, gave Solomon his flying carpet as a proof of her undying love. However, the king was more interested in the construction of the Temple of Jerusalem, and Queen’s gift went to one of his many courtiers. When the news about it reached the Queen, angered she refused to have anything more to do with flying carpets, thus the knowledge on how to make them was lost. The other version says that the carpet was a gift from the God. With such splendid gift, Solomon’s pride grew and God decided to punish the king. When the carpet was mid-air, it shook, and as a result, the 40000 men sited on it fell to their deaths. Not all rulers were as fascinated with flying rugs as Solomon. According to Vanopilejan Dieyarn Loomian, many leaders considered magical carpets blasphemous and ordered their destruction. However, with time some started to see the benefits of said carpets, mostly in war craft. In 2nd century B.C., the king of Parthia named Phraates II was said to be at war with Antiochus VII, the ruler of the Seleucid Empire. According to the story, Phraates flew from the Zagros Mountains on a carpet and heroically defeated his enemy. Another example,from 3rd century AD. says that the Roman Emperor Valerian was abducted during a sneak attack of Sassanian ruler, who effortlessly found his way into the camp on his flying carpet. Sadly, the golden era of magical rugs did not last long. After the accident in which King Absanian lost his son, Vanosan, the monarch was determined to destroy every last of them. While the king’s wrath was not enough to end the production of flying carpets, a massive earthquake did. Allegedly, it destroyed the ingredient in the soil which was essential during the weaving process. The Loomian and Persian parchments claimed that this soil had magnetic properties, which enabled rugs to fly. 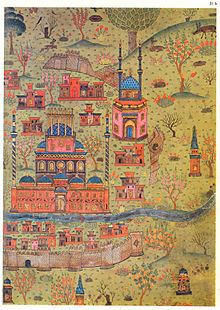 Ben Sherira claimed, that the legendary library of Alexandria, founded by the pharaoh Ptolemy I, had quite a lot of magic carpets in stock. One could be curious about their purpose, but what needs to be remembered is the fact that this library contained all the knowledge of the ancient world – thousands of scrolls, some of which were written in languages considered ancient in that times! Sadly, all of this precious knowledge was lost in the fire that destroyed the building itself. The historical sources vary on who to blame for this, naming Julius Cesar and ‘Amr ibn al-‘As as potential culprits. However, the destruction of flying carpets can be blamed on Genghis Khan. According to Ben Sherira,

Mongolian army massacred the last artisans who weaved flying rugs and stole the last of them. When prisoner told Genghis Khan that those carpets are more agile than famed steppes ponies, the angered chief decapitated him and ordered to burn all looted carpets and confiscate any that were left.

The flying carpet appears in Russian folktales. In one of them, Baba Yaga, an old witch, gave one to Ivan the Fool, among other magical trinkets, which were supposed to help this folk hero in his quest. Even the famous writers could not resist the temptation of this magical artifact. According to Mark Twain’s ‘Captain Stormfield’s Visit to Heaven’, flying carpets are a common method of transportation in Heaven. Hans Christian Andersen, drawing inspiration from ‘One Thousand and One Nights’, decided to write ‘The Flying Trunk’ (Den flyvende Kuffert), choosing a trunk instead of a carpet. J.K Rowling, the author of ‘Harry Potter’ also mentions flying carpets as being illegal in wizardling Britain.

From video games to books, the concept of flying carpets never ceases to disappear, reminding us of rich culture, which gave birth to this ravishing tale. Who knows? Maybe in the future flying carpets will reign the skies once again?