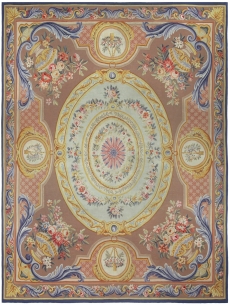 The French decided a long time ago that they were going to make their own rugs and carpets. 1608, to be precise. Acting at the behest of King Henry IV, they were not above imitating the Persian designs and patterns but they were also determined to have their own. Thus was born Savonnerie and Aubusson rugs, the latter having flat weaves while the former have pile or tufted weaving. It has always been said that the French have an artistic genius and this streak is evident in their rugs. French rugs are woven using the renowned Ghirodes Knot and while they acknowledge the influence of older and more traditional carpet motifs like the Betoh, or paisley, they have put their own mark on carpet design with the perfected addition of the acanthus leaf in a majority of their finished products.

The acanthus leaf became a fixture in most French carpets after coming out with motifs of floral arrangements in baskets and vases; those patterns copied from Dutch textiles and Flemish paintings. Their creations leaned heavily on Persian and later on Turkish variants of carpets but retained their Gallic flavor by having acanthus leaf borders. Indigenous to central Europe, the acanthus leaf first appeared in ancient Greece as decorative foliage for its sheer beauty. In Mediterranean cultures, the acanthus plant is a symbol of immortality. The French etched it not only on their carpets but in their architecture, on table legs, damask-backed chairs and other pieces of furniture, balustrades and wall paneling.

Unlike the rugs and carpets of Iran, the Caucasus region or China which were first woven by nomadic tribesmen and village folks, French rugs were made by craftsmen specially-selected by the king’s inner circle.

French carpets were very finely textured, usually with a brown or blue background, with designs that featured seashells, rose buds, and grape vines, as well as Persian-inspired ornamental carvings called campanes with elaborate overall borders of oves and acanthus leaves.

Although such rugs and carpets are no longer produced in France, the ones that remain, such as a Louis XV Savonnerie, still command astronomical prices. Technically indebted to traditional Eastern techniques of carpet weaving, French rugs were soon aesthetically free from all Middle Eastern influences when they began producing the Savonnerie rugs and Aubusson carpets during the reign of the Sun King, Louis XIV. They redefined weave designs by adding not only the acanthus leaf but many other elements reflecting strictly European influences as well.

Journey into the World of "Abrash" Rugs

Just When You Think All Beautiful Carpets are Persian, You Find out the Most Exquisite is From Central Asia