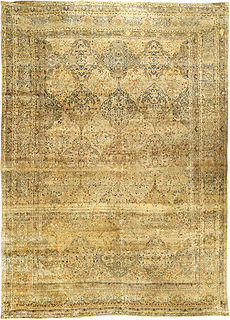 Whoever it was who said that a picture is worth a thousand words was right. Colors define the beauty and splendor of the world. This also holds true for rugs. The colors of a rug do more than just define it though. They breathe life into it and express its unique personality. From afar, the Grand Canyon might seem like nothing more than a giant gash in the earth. Closer inspection, however, would reveal a cacophony of colors, textures and materials that come together to create singular phenomenon. From afar, many rugs and carpets may appear alike, but, upon closer inspection, natural variation in batches, different rates of aging, among other things can result in a similarly singular result in the appearance of a carpet. This is known as abrash.

Using different dyes at different points in the weaving process is one technique used by the weaver to create slight yet deliberate variations in color throughout the rug creating an abrash.

Savvy carpet collectors are always on the lookout for carpets with a natural abrash; a natural and gradually occurring aging process of older creations well on their way to attaining the status of antique. Some collectors are experts on dyes and they can tell if those used on a rug or carpet was vegetable-based or synthetic.

A natural aging process is different from fading, which is not the way an abrash is supposed to look. Looking closely at the back of a carpet, for instance, will show signs of abrash if there are no signs of variations in the colors on the opposite side of the same area of the rug. Synthetic dyes will not develop abrash.

Yet another way to know whether the carpet or rug has abrash is to look deep into the rug or carpet pile by spreading it apart. A pile wherein the color is stronger in the lower or middle area of the wool and appears to be uniform all throughout its depth exhibits abrash properties. Not everyone is a collector, and although having an abrash in carpets seem to always give them a certain “oomph” or character, not everyone is looking for that particular effect in their chosen carpet.

Some like their rugs staid and solid, designed, patterned, styled and woven exactly the way they were thousands of years ago. But there are others who want just a little imperfection to make things more interesting. Those are the kind of individuals who buy a carpet or rug with just enough abrash to draw some attention, a stifled gasp of pleasant surprise or create a small adventure in conventional color.

Leave It to the French to Immortalize the Acanthus Leaf