When great women join forces, the effect may be nothing but mind-blowing. This time, Jennifer Post, a renowned interior designer, enters one of the last buildings to bear Hadid’s personal stamp to complete the vision of the architecture’s Grande Dame. Join the tour around 520 West 28th Street residence and enjoy the heights of design artistry.

For over three decades Zaha Hadid had been redefining the world’s view on architecture by giving it a fresh and visionary edge seasoned with a touch of femininity. Until her untimely death last year at the age of 65, she had accomplished things that some would have to spend three lifetimes on. The first woman to win the prestigious Pritzker Architecture Prize was hailed by the Guardian of London as the “Queen of the curve”, who “liberated architectural geometry, giving it a whole new expressive identity.”

Among her most recognizable projects one may find the aquatic center for the London 2012 Olympics, Michigan State University’s Broad Art Museum in the US, and the Guangzhou Opera House in China. Her work is revolutionary in approach to form and space which are woven within structure and always put in the right context. Zaha definitely knew how to transform concrete, steel and glass into something almost ethereal, so that each project would give the irresistible impression of fluidity and connectivity.

Zaha Hadid Architects, under the leadership of Tiago Correia, has decided to put one of the iconic designer’s last visions to life. “We made a building that very deliberately blurs the lines between art and architecture,” Tiago explains. “That’s our way to pay tribute to the location, to Zaha’s work, and to the burgeoning lifestyle in the area.” Correia, when describing the residence, says it’s “sculpture inhabited.” The project at 520 West 28th Street was inspired by Hadid’s fascination with the public park, hence its almost organic fluidity (also, a trademark of Zaha’s own style).

“The split, what we call the chevron shape, became the theme of the project, and we expressed it very strongly on the facade with these handcrafted, dark stainless-steel panels,” Correia says. The choice of materials is far from accidental. Although the building maintains Hadid’s favorite curvilinear silhouette, it also refers to New York’s history through the use of stainless steel. “We wanted it to very directly embrace the historic quality of the neighborhood and the High Line”, Tiago reveals. Looking at this marvelous project, we have no doubts that the merger went smoothly and to the outstanding results. See for yourselves.

The outside character of the building at 520 West 28th Street is consistently reflected on the inside. “One of the foundations of Zaha’s work is a strong connection between building and landscape, in this case the urban landscape,” explains Correia. “So with this building, we have, on the outside, a very curved facade that creates a very recognizable new point of visual interest that also embodies the history of the neighborhood. Inside, we use the same curves to delicately frame the beautiful vista that opens from the project: the High Line, midtown, the Empire State, the Hudson.

The building has this shape that captures the best in every facade and frames these views. It’s very deliberately done in an impactful way.” Hadid’s interiors are not only easily recognizable but most importantly – livable. The connection with the outside world is achieved by the application of huge windowpanes that allow light and the atmosphere of New York city to enter the room, at the same time maintaining the private character of each apartment. The internal space, due to Hadid’s ingenuity, is able to embrace absolutely any interior design. One of the great designers who took on a daring task of arranging the living space at 520 West 28th street is the award winning principal and visionary of her firm, Jennifer Post.

“I am usually the creative visionary behind both the architecture and interior design of a space. Here, I am respectfully creating a vision that coexists with the vision of one of architecture’s greatest minds. This prompted me to really consider every move, every decision in a different, special way” – says Post.

Her patience and consideration paid off. The interior she created employs both her and Hadid’s style, and apart from being visionary is also homely and functional. Pole went with minimalism, space and clean forms which she spiced up with playful pops of color. The living room is rendered in muted shades which are supposed to be the framework for the centerpiece of the design – the magnificent views of New York City.

Zaha’s curvilinear shapes are best reflected in the kitchen. “I think we brought our design to a new level in terms of refinement and consistency, between all the elements of the building, both interior and exterior,” says Correia. Instead of focusing solely on the spirit of Hadid, Jennifer Pole paid tribute to art in general. In the dining area, a contemporary, vibrant painting attracts attention and ensures that no boredom is allowed. This concept extends throughout all the rooms in the apartment, combining up-to-date trends with the serene vibe. A sculpture in the bathroom? Yes please! Thanks to her impeccable sense of style, Jennifer Post escapes schemes while preserving timeless elegance and perfect balance between artistry and life.

The unique Color Theory Show starts May 16th at 306 East 61st Street. A special opening reception on Tuesday, May 16, 2017, from 5 to 8 p.m., will focus on the use of color in design schemes. That’s not all. The centerpiece of the evening cocktail party will be a conversation between Donald Kaufman and designer Carey Maloney of M(Group). The two men will discuss the characteristic of carpet color versus paint color, how the color of a room relates to the color of a carpet and where tonal depth in carpets comes from. Every design aficionado should already be over the moon 😉 Make sure you don’t miss it! 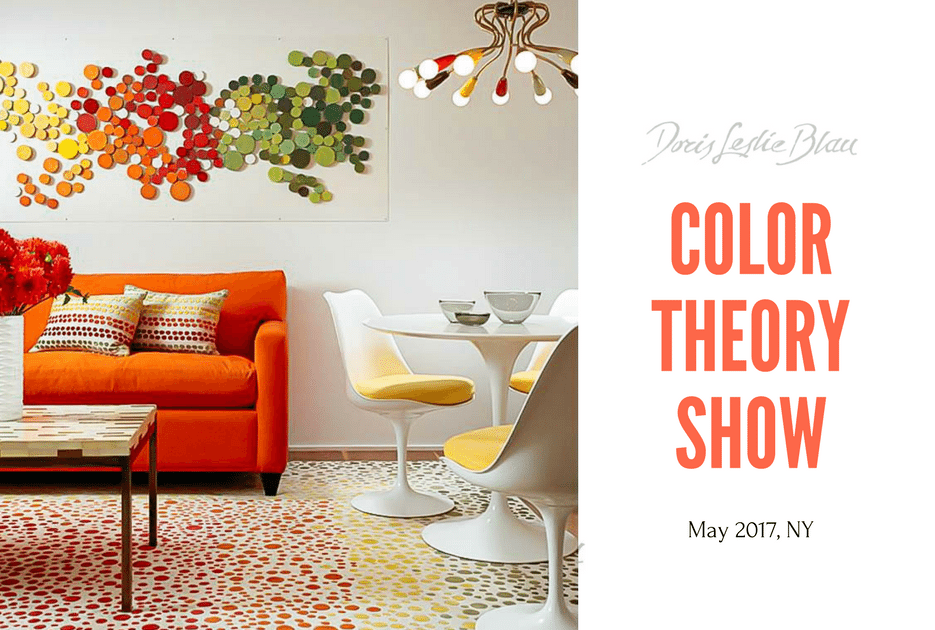 Interior Decorating with Color: How To Use Warm Hues?