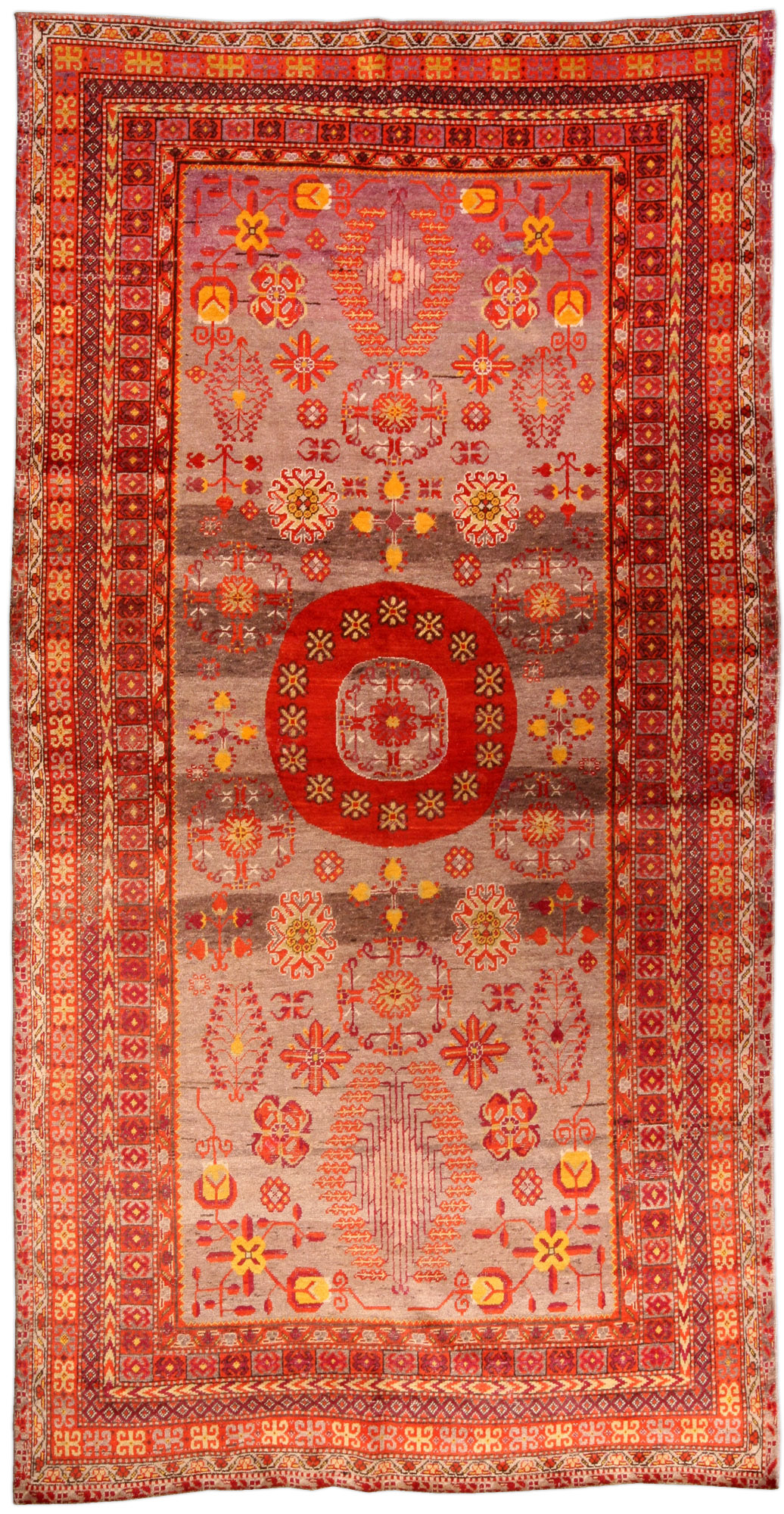 Samarkand rugs are one of the richest textile traditions in the world. There’s a tendency to lump all Central Asian textiles into one family when in fact regional weaving and aesthetic styles are quite distinct.

With Fall approaching, now seemed like the perfect time to celebrate the brilliant, red-and-gold vibrancy of some of our amazing Samarkand rugs. 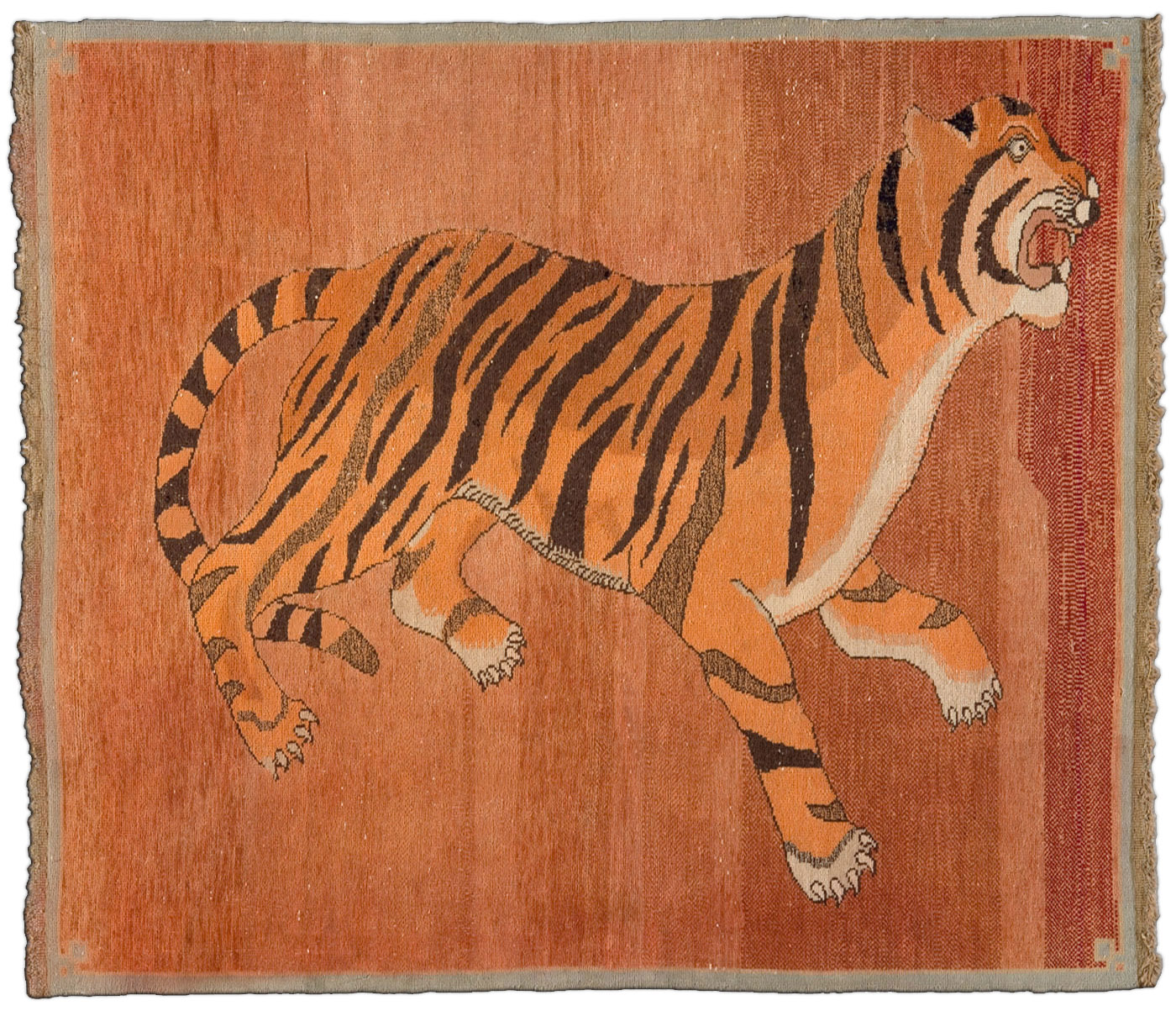 Samarkand is a city in Uzbekistan.

It’s the third-largest city in the land-locked country, and it’s perhaps most noted for its position along the Silk Road. In ancient times the city of Samarkand linked the Far East to the West.

But Samarkand rugs actually come from present-day Xinjiang, which is located in China.

Samarkand carpets were woven by women from the Uzbek and Kyrgyz tribes (ethnic groups affiliated with present-day Uzbekistan and Kyrgyzstan) located in the cities of Kashgar, Khotan and Yarkand. The rugs were most popular from the 1600s and on through the 1800s. At that time, all three cities were located in an area loosely known as East Turkestan, which was administered by China. Today that area comprises the Chinese province Xinjiang.

Samarkand designs and patterns were heavily influenced by a confluence of cultures. 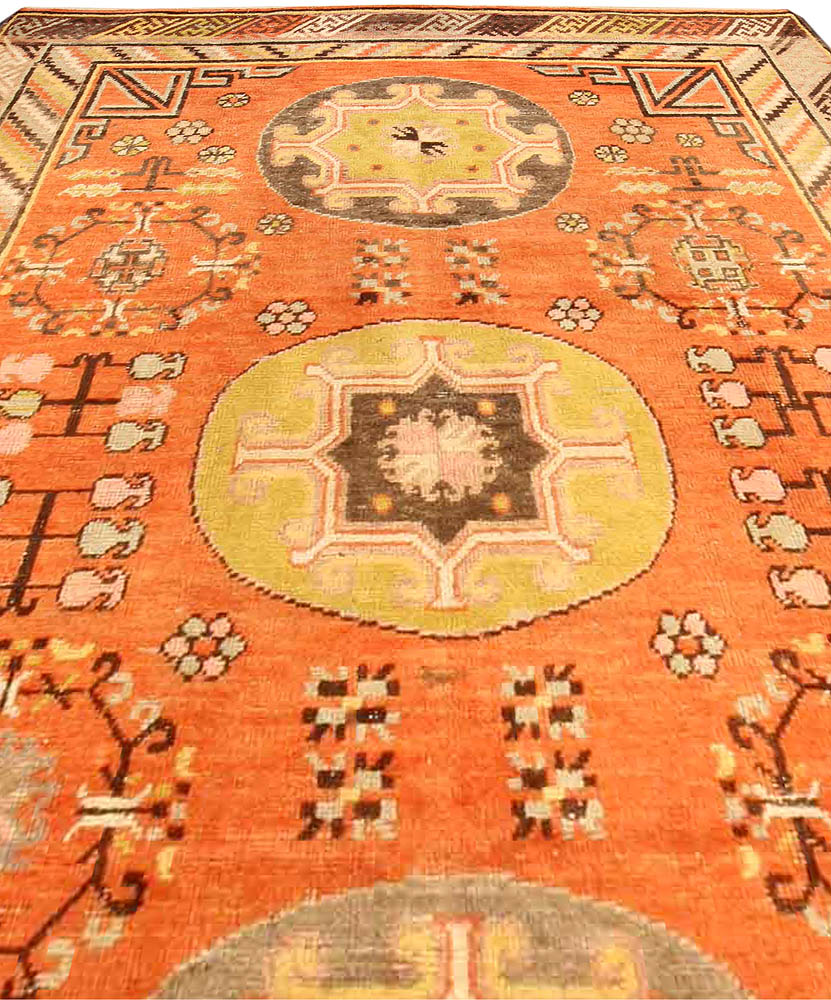 In general, Samarkand rugs are considered more Chinese-influenced than Central Asian/Middle Eastern. However, a multiplicity of ethnicities have been present in the Xinijiang area for centuries, and their various cultural influences have manifested in Samarkand rugs.

Rich red coloring, flowers, dragons and fish are all points of Chinese influence. 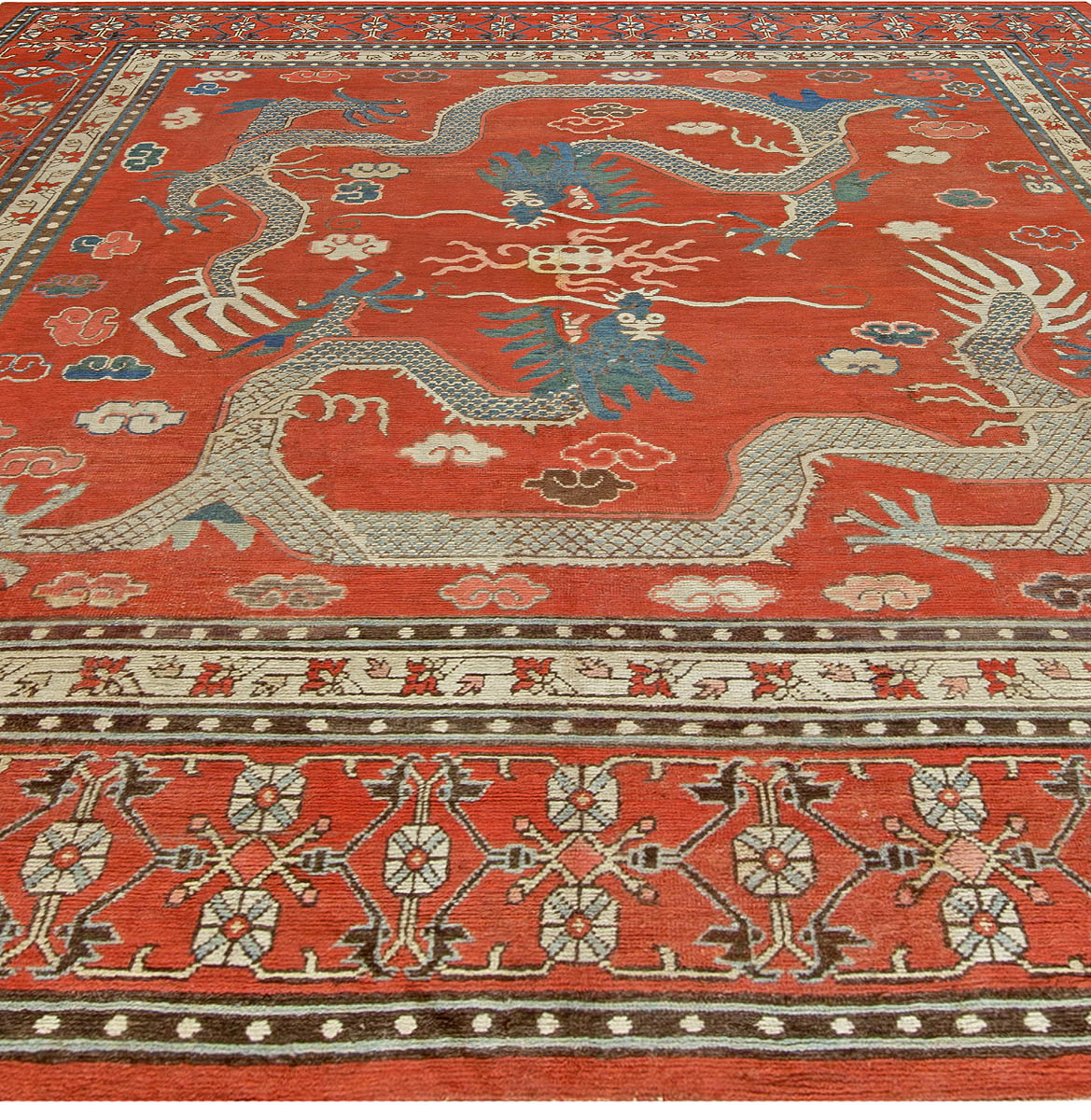 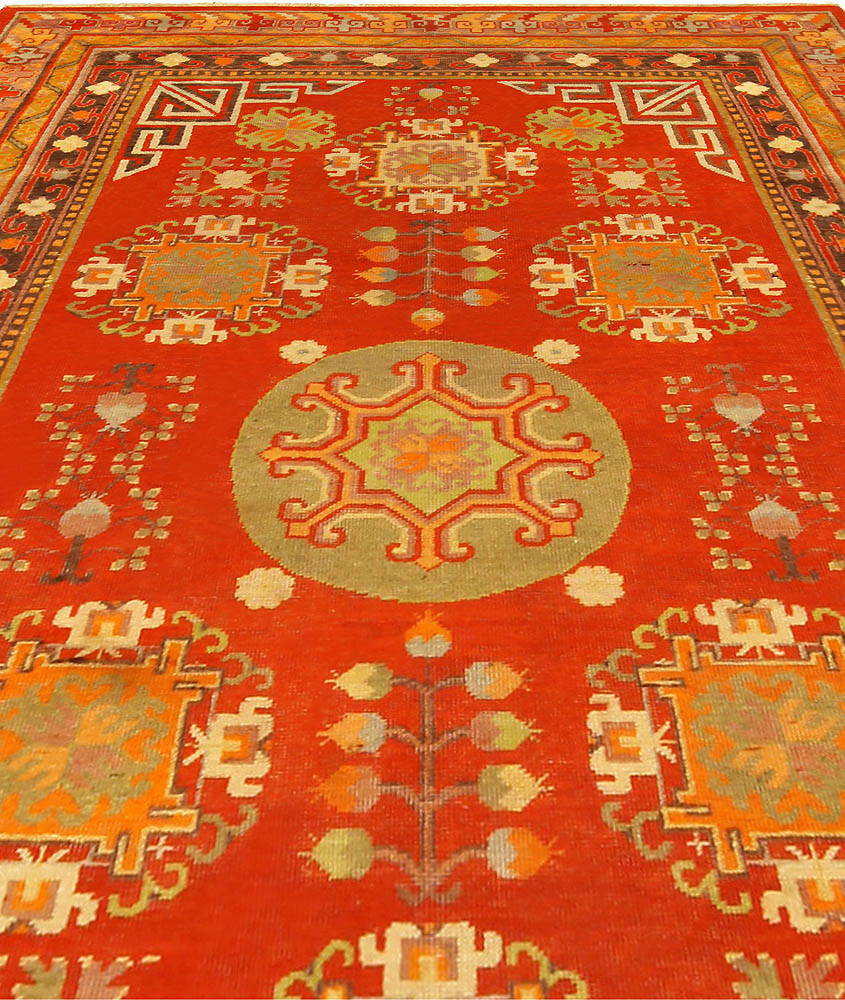 Persian, Turkish and Indian influences are seen in Samarkand rugs too. 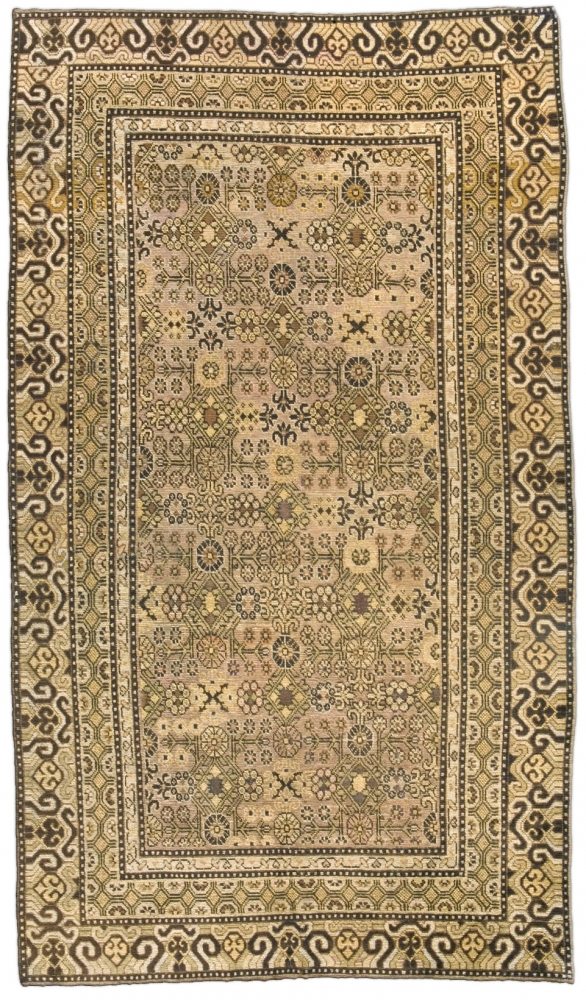 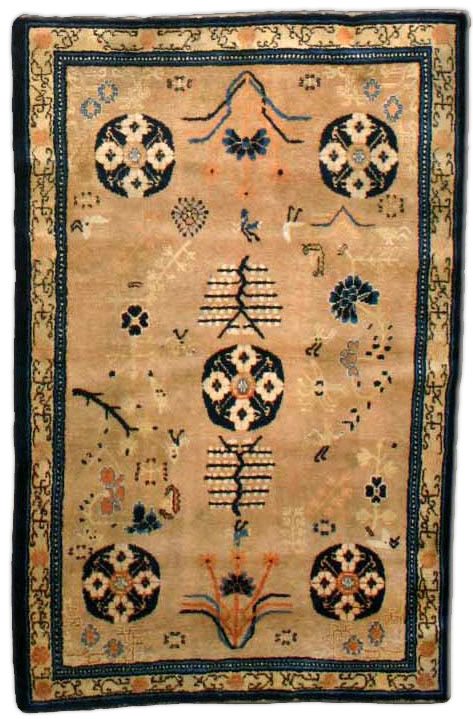 Richly-patterned borders denote Turkish influence. Pomegranates are symbols originating from Turkey, and the swastika – a Hindu symbol for God and energy – comes from India and it too often appears in Samarkand rugs. Influences from Russia, Pakistan and other parts of Central Asia can also be found in some Samarkands.

With the rise of manufacturing and industrialism in the 20th century, the production of Samarkand rugs waned.

However, they are still popular in contemporary design, especially the more abstract patterns, which are easy to pair with contemporary aesthetics. Earthy reds and browns make for a solid foundation upon which to layer modern furnishings.

In our age of globalization it’s tempting to think ‘we’ invented the cultural melting pot. Samarkand rugs serve as a reminder that artisans have been borrowing and blending aesthetics for centuries.