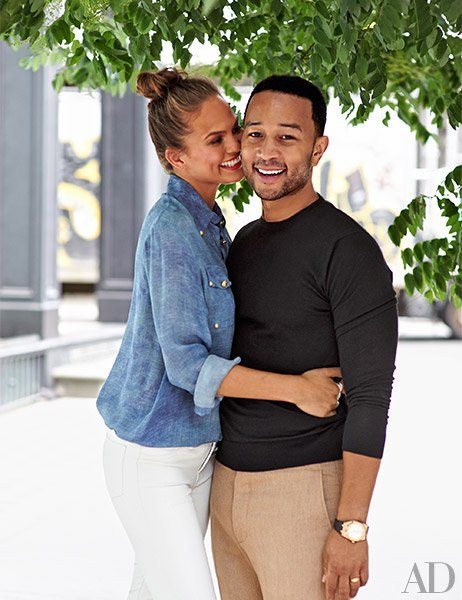 We’re thrilled to have our rugs featured in Architectural Digest’s February cover story on John Legend and Chrissy Teigen’s beautifully renovated home by Don Stewart of Desiderata Design along with Archi-Tectonics’ Winka Dubbeldam.

This week we had a chance to catch up with Don and ask him more about the work that went into this wonderfully eclectic yet subtly continuous home.

What was the first piece to go in the bedroom?

The decorative French leather panel behind the bed. It’s from the 1860s. John and I saw it when we were having a custom sofa made. We both saw this thing and thought it would be really cool in there.

After that we got the bed, which is this dark chocolaty almost eggplant. The drapery is eggplant as well.

So the rug was almost the last thing to come in?

Yes. We needed the rug to lighten the room up. It has an almost musical pattern, it reminds me of sound-wave patterns, but in mint and raspberry and cream. And it resonates with the wall panel. How about in the living room?

The rug was the final element, appropriately named ‘Water.’ I think the first thing was the floor standing chandelier. We were shopping for dining chairs. We were in Eccola, and Chrissy was just drawn to this chandelier.

The ottoman. That was a strong element we liked. We got that right away just because they both responded to it immediately.

Sounds like you put it together piece by piece and yet as a whole there’s a flow to the space – how do you manage that?

That’s where I don’t know how to articulate what I do. The main thing was they both had to love everything. Any hesitations, and it’s off the board. I didn’t come up with “I’m going to do a blue room” or anything like that.

Is that how you approach all of your projects?

The meaning of the word desiderata is “anything desired as essential or necessary.” That was the whole premise of opening my business. Make it about them. I don’t want to come in there and give it the ‘Don Stewart’ look. It’s not about me really, I’m just the filter. I take in what I see them responding to and touching. That’s where I pay the most attention.

You can learn more about Don here.

Just When You Think All Beautiful Carpets are Persian, You Find out the Most Exquisite is From Central Asia