The traditional Scandinavian area rug is the rya, made from hand-knotted wool. Dating from the fifteenth century, the first antique ryas were coarse, long-piled heavy coverlets used by fishermen instead of furs. By the eighteenth century ryas were generally part of a woman’s trousseau and proudly displayed as important status symbols within the home.

By the nineteenth century, Swedish ryas were usurped by the arrival of quilted coverlets from continental Europe and from then on were woven as purely ornamental elements. Although the designs of antique and vintage Scandinavian antique rugs were originally inspired by imported textiles, they gradually developed into an innately northern expression.

Simple geometric patterns and vignettes from everyday life such as bouquets of flowers, a child’s sampler or a pet dog were incorporated into flat woven tapestries or Swedish pile vintage area rugs and carpets, adding charm and immediacy to this folk art. A fresh and appealing aesthetic was sustained during the first half of the twentieth century by the weavings of the celebrated Swedish carpet designer Marta Maas-Fjetterstom and her circle.

The simplicity and purity of design in vintage Scandinavian rugs gives them an immediate relevance and contemporary desirability. Furthermore, Scandinavian flat weave rugs of the early and mid 20th century are immensely sougth after due to their incredible artistic merits and superior craftsmanship. For Swedish rug designer in the early 20th century, the production of rugs and textiles was elevated to an art form, which had great international appeal. 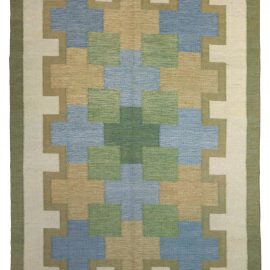