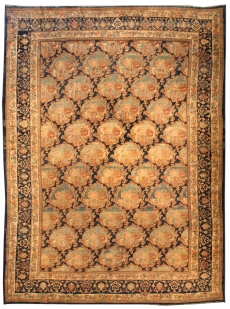 When Napoleon established the Egyptian Scientific Academy in Cairo, the term “cartouche” was given to the hieroglyphic representation of an oval ring made from a certain length of rope folded and tied at one of its ends. The sign reminded Napoleon’s soldiers of the cartridges of their guns. In demotic script, however, the cartouche became a parenthetical pair with a vertical line that symbolized all things encircled by the sun. A sure indication that the pharaoh’s domain included the cosmos. Today, the cartouche is used as a design element in some areas of carpets which have a date or other inscription.

Many rugs are “signed,” with the initials of the weaver or the individual who financed the production of the rugs. Written in Farsi (the modern equivalent of the Persian language) or Arabic in script form, this signature is contained in a cartouche centered at the end of a rug inserted in the rug’s border. The inscription is usually the patronymic of the family whose member or members wove the rugs.

But we speak of city-made rugs, not those woven by village folk. And not all inscriptions which appear in a cartouche may be considered signatures per se because some city-based rug weavers incorporated calligraphy into their rugs. This stylized form of writing is actually more ornamental than script and is not entirely readable. In some carpets, there may be some text which is readable; perhaps a secular poetry verse which was a favorite of the weaver’s or a commonly-memorized line from the Koran.

Do you pay extra for a rug or carpet that has a cartouche with a signature or inscription?

No, you don’t. It’s like one of those emblems on the doorsills that General Motors used to stick on their Oldsmobile’s and Buicks until the 1990s which read “Body by Fisher.” No one minded that it was there, but nobody would have paid extra cash just to have it stuck on the doorsill. At any rate, if you purchase a carpet and you notice that there’s an actual readable inscription or some signature of sorts in a cartouche, or even better, a date, you can always tell everybody your carpet is an antique.

Fresh Look for the DLB Showroom at D&D