The asymmetrical knot – Senneh – allows artisans to create meticulous designs that worked out to the smallest details. Although tiny alterations may appear in every weaving area, the meaning of Persian rug motifs remains ever the same, just as the significance of colors that adorn them. The wide array of hues – from red, yellow to blue Persian rugs is not merely a decoration – it is a contribution to the bigger story which the skilled craftsmen wanted us to read from the intertwining warp and weft. To read the message behind a Persian carpet properly, next to understanding the patterns, one must find out what each hue stands for. 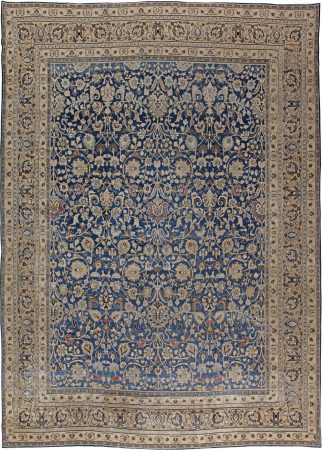 The Meaning of Blue in Persian Rugs

Blue is the color of trust, responsibility, honesty, and loyalty. After red and beige, it is one of the most commonly applied hues in Persian rugs, although its history is not an easy one. There are not many features of nature that are blue and can be turned into a dye. Initially, blue was obtained from a woad plant but it didn’t give long-lasting and qualitative results. The shade extracted from woad can be compared to today’s pastel blue. It wasn’t until the discovery of the Indigo plant that blue acquired its deep, sapphire undertones. Thankfully, the Orient could enjoy the gifts of the Indigofera tinctoria – the indigo plant – long before Europe, which came to know indigo only in the Middle Ages. Blue Persian rug stands for power, but also solitude – an allusion to the afterlife. Therefore, it is very often paired with the motifs expressing hope for life after death, like the tree of life or cypresses. 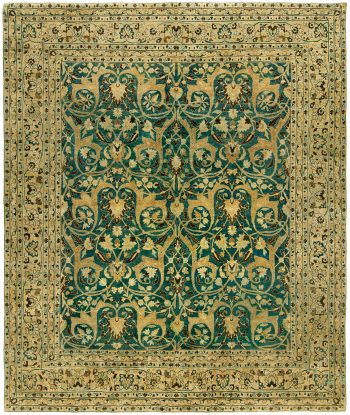 The Meaning of Green in Persian Rugs

From a psychological perspective, green is the color of balance, harmony, and growth. It symbolizes hope and new life as it is associated with spring and the rebirth of nature. In Persian rugs, green was not the most commonly applied hue (for a reason) but it can undoubtedly be named the most important one. By the Persians, particularly the orthodox Mohammedans, green was considered a sacred color associated with the Prophet Mohammed. According to Koran, emerald green was Mohammed’s favorite shade, thus the weavers applied it with caution and only to the most magnificent of Persian rugs that would least likely be walked on. In Persian carpets, green also symbolizes hope, renewal and the unstoppable force of life. It was achieved thanks to a double-dyeing of threads with natural components. The basic color theory teaches us that the combination of blue and yellow gives green and that was the fact well-known by the oriental weavers. The color blue was obtained from the indigo plant. After dyeing the wool blue, it was dyed yellow. Yellow dye was often obtained from various flowers including Saffron, Larkspur, vine leaves, and buckthorn. The Meaning of Red in Persian Rugs

Red is the color of confidence, action, energy, and passion. People tend to perceive it as a warm, positive and energizing shade that excites emotions attracts attention and motivates us to take action. It is the color of blood and fire. In Persian rugs, red was frequently applied as it was relatively easily obtained and gave wonderful effects. Moreover, it helped the artisans to bring attention to certain patterns or motifs that they wanted to highlight. The most popular and sought-after source of red colorant for spun wool was madder root as it delivered rich, profound dye. However, it was only one of many options. Snails, beetles, flowers and weeds – from ground cochineal to dried pomegranate – dyed sheep and goat wool for carpet wefts that later served to create crimson meticulous patterns of backgrounds. Red in Persian rugs invokes happiness, joy, luck, courage, wealth and a vibrant life force. It is worth mentioning that in Asia brides used to wear red for their wedding day.

The Meaning of Gold and Yellow in Persian Rugs

The name of the color yellow has the same etymological base as the words “gold”, “yell”, or “cry out”, which perfectly describes this warm hue. Persians also associated yellow with radiance, sun and the joy of life. Yellows were made from pomegranate skins, vine leaves, saffron or Ox-eye chamomile flowers. Gold, a more toned shade of yellow mixed with brown, stood for wealth and power. It was used sparingly in Persian rugs and was usually reserved for royalty and rulers. A pure and sheen gold hue could also be achieved by the application of golden threads which automatically increased the value and prestige of a carpet.

The Meaning of Brown in Persian Rugs

Brown represents the earth and soil, thus in Persian rugs, it is a color of fertility. Browns were obtained from oak bark and walnut fruits, both of which were found abundantly in the Orient.

The Meaning of Orange in Persian Rugs

Although in Europe and America orange is mostly associated with amusement, the unconventional, extroverts, fire, activity and danger, in Asia orange is an important symbolic color of Buddhism and Hinduism. This spiritual and meditational shade in Persian rugs stands for devotion, humility, and piety. It was obtained by mixing yellow and red hues together.

The Meaning of Beige and White in Persian Rugs

White is universally associated with purity, innocence, and cleanness, and the same meaning was attributed to it by the Persian weavers. Beige and off-white shades in Persian rugs come simply from the un-dyed wool and differ slightly depending on the region and the quality of wool used in particular carpets.

The Meaning of Black in Persian Rugs

Black is the most powerful of all colors yet its connotations in dark blue Persian rugs lean towards doom, destruction, and mourning. From the aesthetic point of view, much of black can be overwhelming. Persian weavers, in contrast to, for instance, Caucasian or Bessarabian ones, rarely used black to create complete patterns or the background. It is most commonly applied to outline the design. Natural black dyes were made from tannin, oak tree galls or iron.

Here Are the Most Popular Home Décor Trends, According to Instagram

6 Nature Wedding Decor Ideas That Are Trending Like Crazy