Darkness falls across the land, the midnight hour is close at hand, creatures crawl in search of blood to terrorize y’all’s neighborhood… so you’d better gird up your loins and prepare to welcome them with some kick-ass Halloween décor!

We are just kidding. We all know monsters do not exist and the most dangerous thing you may expect on Halloween are roaming hordes of jolly dressed up neighbors’ kids threatening to pull a trick on you unless they get a handful of candies. Doris Leslie Blau’s crew loves Halloween (come on, who doesn’t?) thus we want to share some of the trivia and creative ideas. 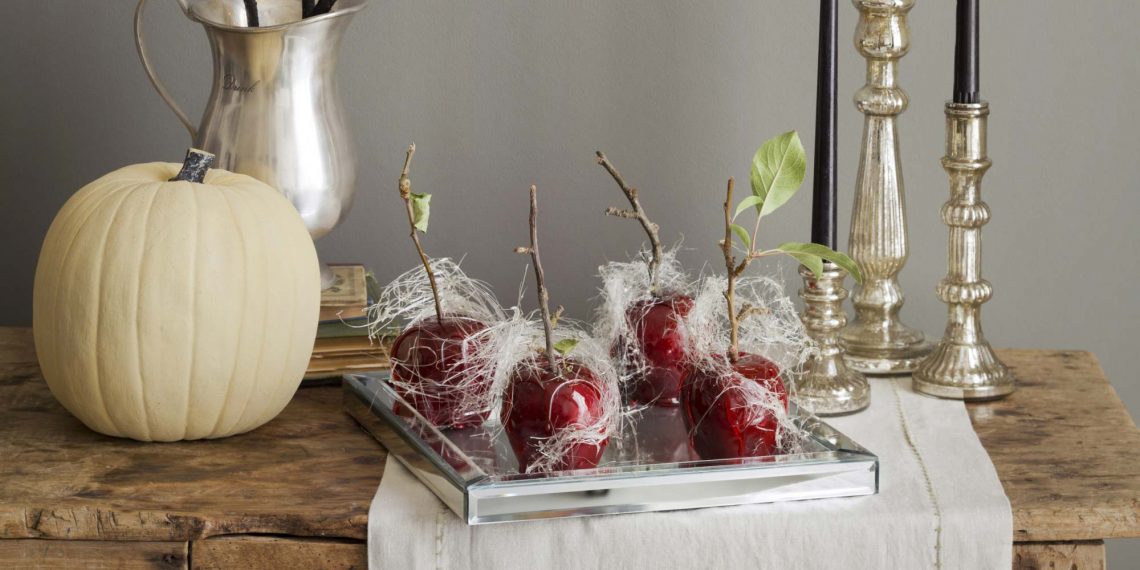 Who doesn’t know the old good jack-o’-lantern? The custom of carving turnips, gourds, beets and rutabagas and putting a candle inside was also practiced by the Celts. It symbolized ignis fatuus (“foolish fire” from Medieval Latin) or will-o’-the-wisp, an atmospheric ghost light seen by travellers at night, especially over marshes, bogs or swamps. The phenomenon is well attested in the English and European culture and although nowadays well-explained, in the past it was associated with paranormal activity. The tradition of carving pumpkins came later due to the fact that they were vegetables unknown to the Celts. Presently it is hard to imagine a Halloween décor without a pumpkin.

Carving is always a good option, yet it requires certain strength and dealing with a knife. Besides, even a pumpkin wants to be chic this season 😉 Try painting it with this year’s Halloween hottest colors – white, gold and black! You can also attach some contrasting ornaments or make it a rowan twig wreath. This way, a pumpkin will please your eye not only during Halloween, but throughout the entire fall season. Trick the murky weather by treating yourself with some glamorous decorations!

SET UP A TABLE FOR MODERN GUISING

You are probably wondering what the word ‘guising’ even means. We hasten with the explanation. In Medieval times when winters were harsh and resources were scarce, Halloween, or All Hallows’ Eve as it was called back then , constituted a perfect opportunity to get some free goods. Young people would dress up in costumes and go from house to house reciting poetry, singing and telling jokes in exchange for food, drink or money. This custom called ‘guising’, which derives from a much older Celtic tradition (about that later), was a root of today’s treat-or-treating. So, how to get ready for the modern guising? By setting up an amazing Halloween-themed table! 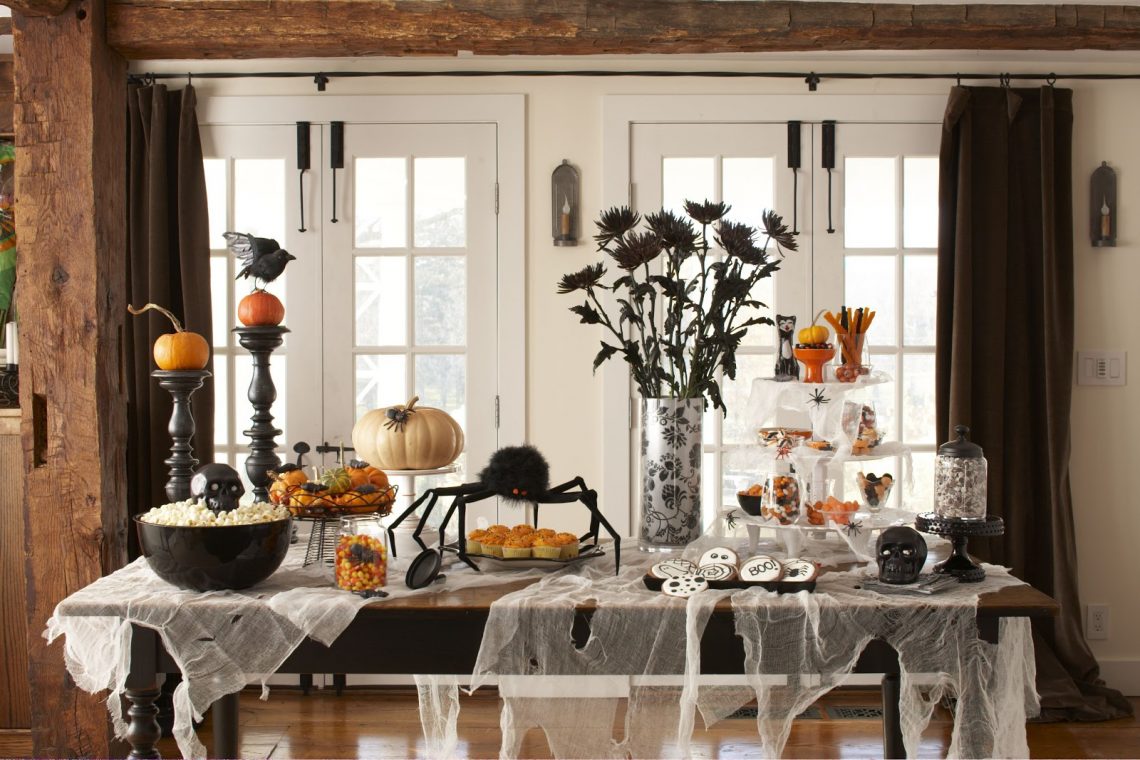 Black is the most appropriate color for the occasion, but it would look dull and predictable if you’d make everything dark as a raven’s wing. First of all, remember that the best setting for black is… white. As for accessories, decide on autumn colors, such as orange, gold and crimson with only accents of black. And hey, make at least some of the treats by yourself! Home-made cookies are healthier than the ones from a supermarket and you can have super fun decorating them with your loved ones.  Orange cake pops – no problem! Golden popcorn – why not? Bloody cupcakes – if you please. At a table full of terribly tasty home-made goodies there will be a ton of volunteers willing to recite Edgar Alan Poe’s poetry just to get a tiny bite 😉 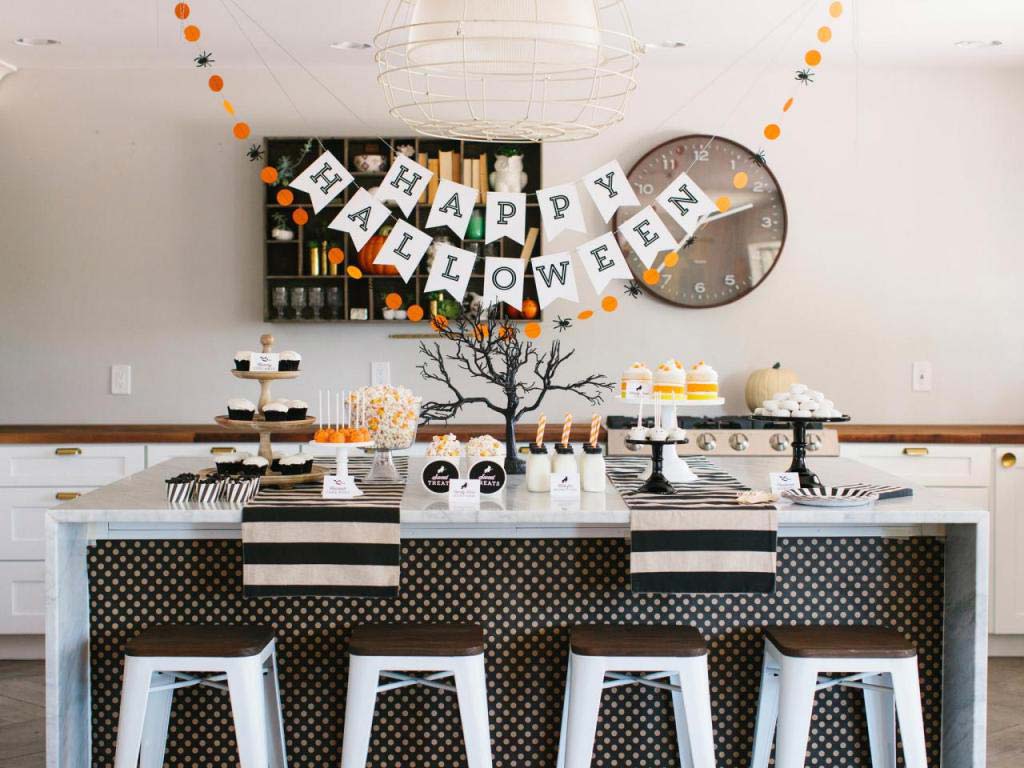 … send shivers down your spine. Shrieking skulls will shock your soul, seal your doom tonight. Halloween is associated with everything that’s hair-rising and spine-chilling but why exactly? It dates back over 2000 years and originates from an ancient Celtic festival of Samhain (pronounced sow-in). The Celts celebrated their new year on November 1, which marked the end of summer and the harvest and the dawn of the cold, gloomy winter – a time associated with human death. They believed that the night before the Samhain, the line between the world of the living and the dead became blurred, therefore the ghosts of the deceased returned to Earth. To keep the roaming spirits at bay, people would leave wine and food on their doorsteps and wear masks when were leaving the house so they would be mistaken for fellow ghosts. 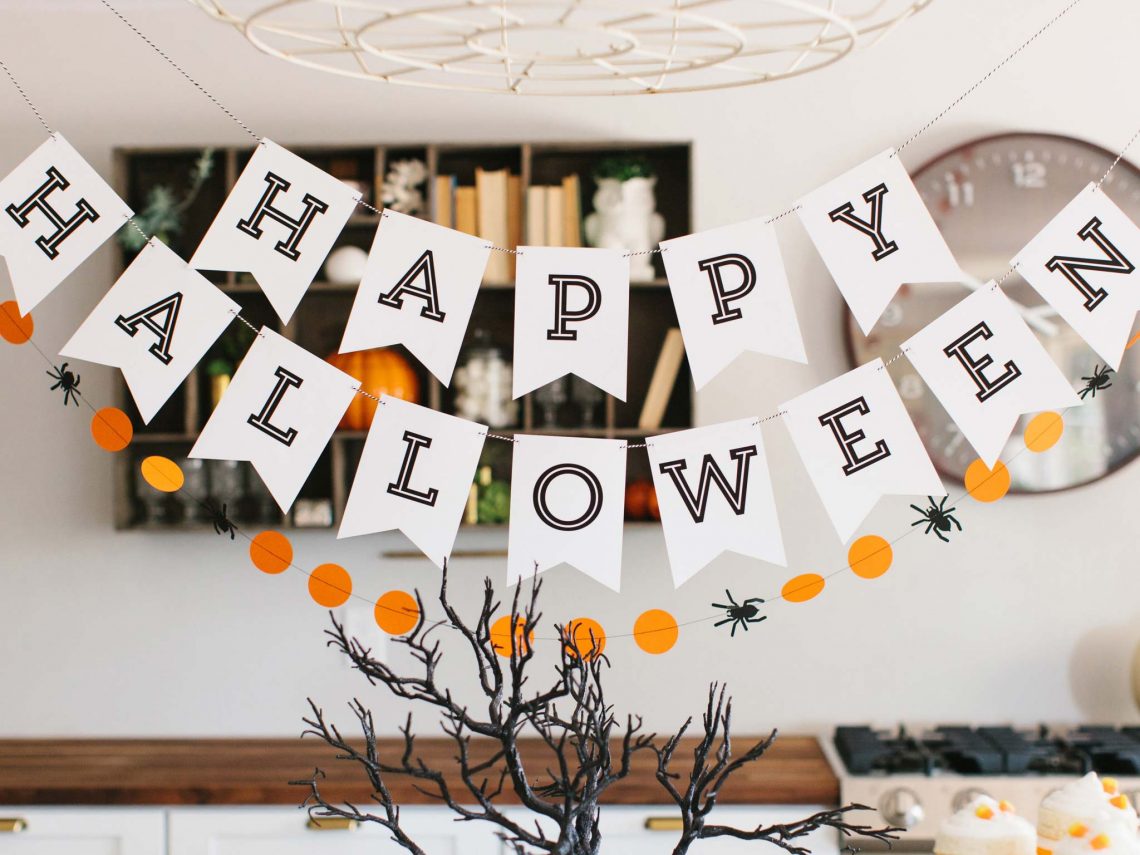 Thus, the tradition of wearing blood curdling costumes and setting up chilling accessories is supposed to ward off evil spirits, not attract them. With that knowledge, you should better get prepared for that dangerous night 😉 Start with your front porch by putting out jack-o’-lanterns, broomsticks, skulls (if you can get one in a shop, obviously; we don’t recommend grave-digging, the dirt is just so hard to remove from under the nails ) and hanging garlands of bats and spiders. 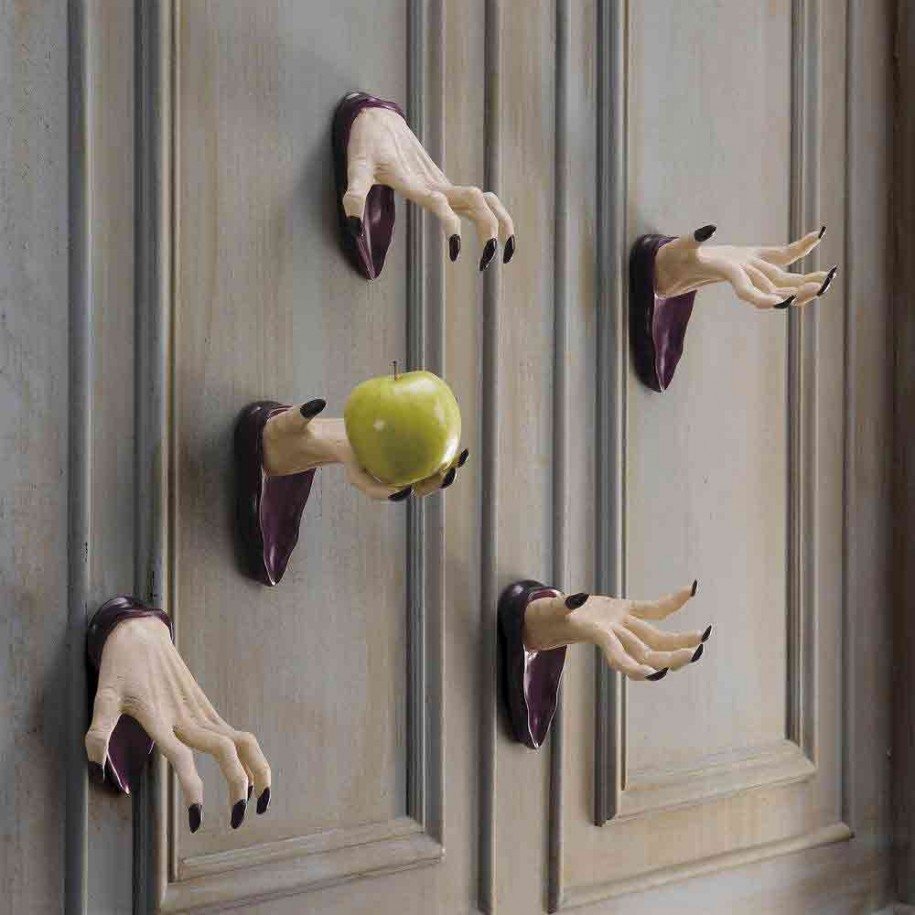 Again, you can totally DIY! Inside your interior you can arrange a Halloween corner, let it be around a fireplace or your favorite cupboard. Make holes in a ragged cloth, paint twigs black, exchange your photos with some creepy Victorian printouts, inflate transparent balloons and wrap them into the see-though black tulle and enjoy your handmade, unique Halloween décor! We assure, no bad ghost will even come near your house! 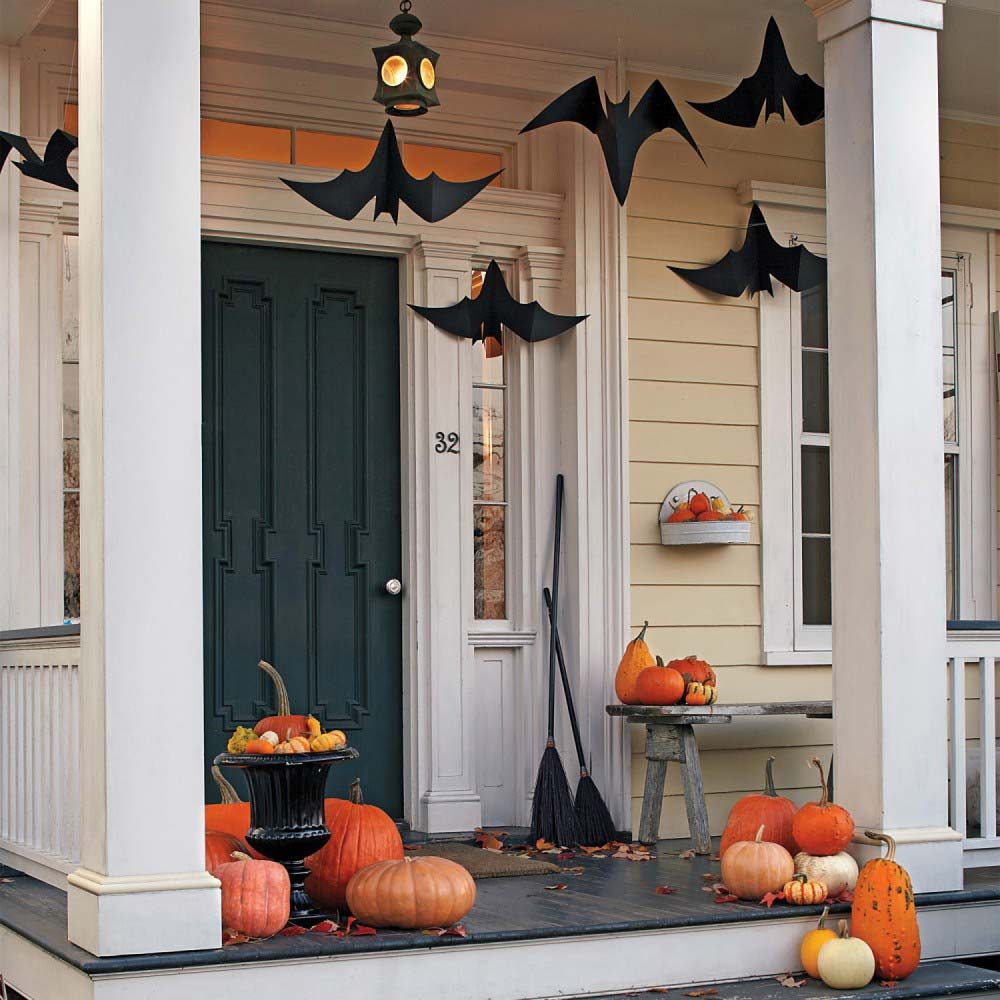 BONUS IDEA: CARPETS CAN BE CREEPY TOO!

Have you seen the latest film Miss Peregrine’s Home For Peculiar Children? If not, you definitely should! It is a perfect source of chilling inspirations for house décor and costumes. What drew our attention are carpets. Yes, antique rugs are just ideal for the Halloween-inspired interiors, you can even put them on your from porch (there are some amazing all-weather rugs, that will not take any damage from it). Haunted Victorian style is a thing! If you need a rug which looks like a movie star check our offer here 🙂 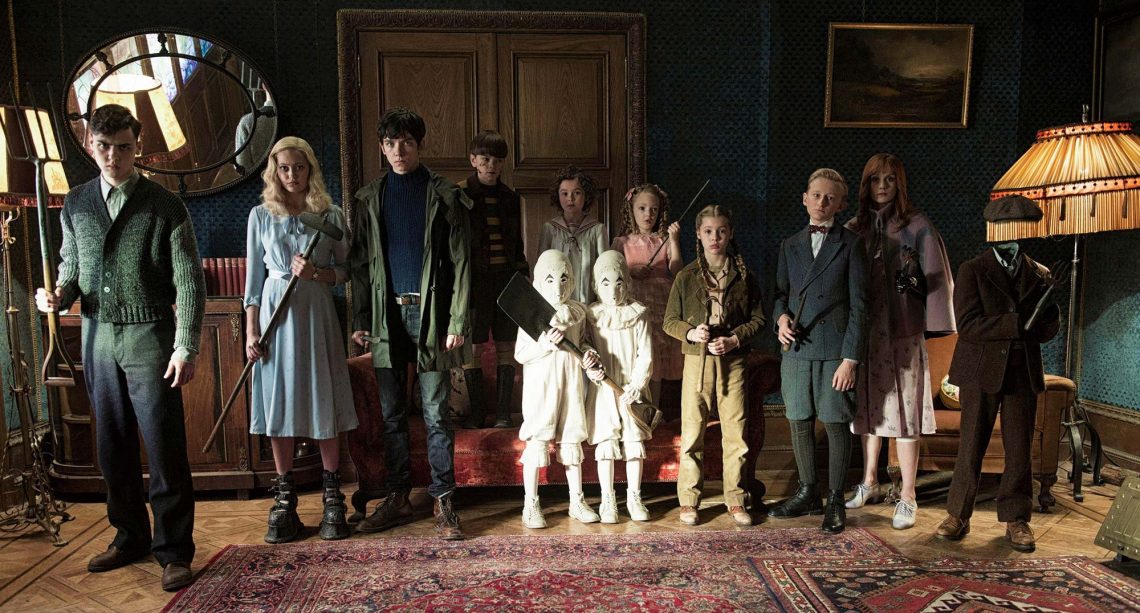 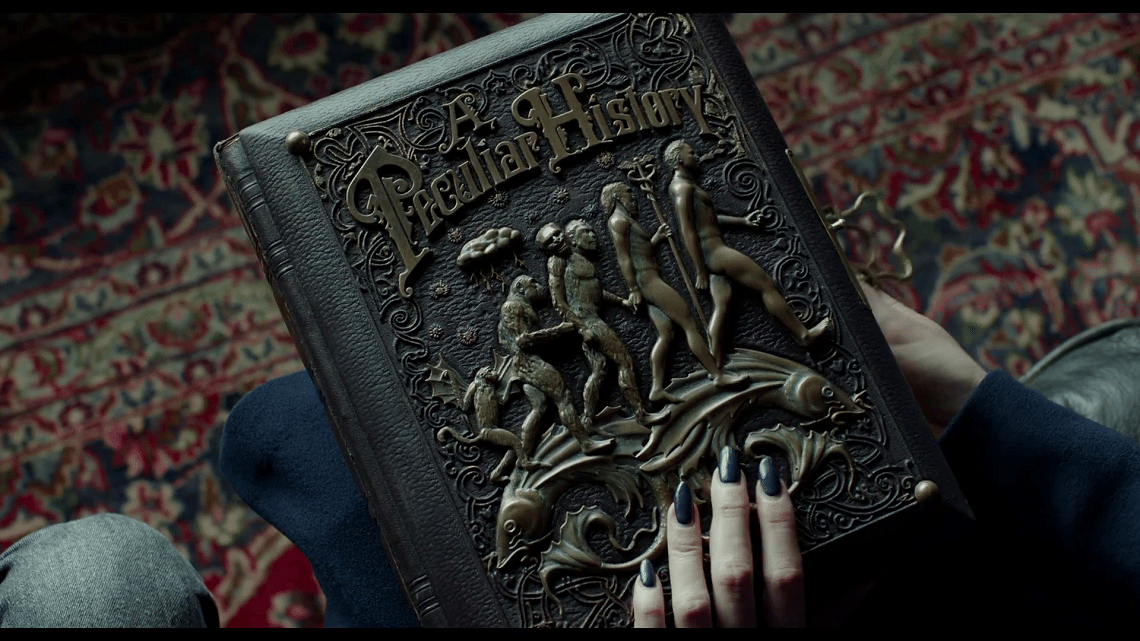 The Difference Between Handknotted and Machine - Made Carpets

The Principles of Antique Rug Collecting