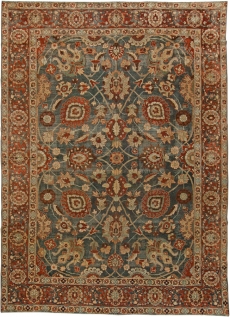 Persian rugs are a famous entity of the carpet industry. They have ruled the ancient rug industry and are still in high demand in the international markets. These carpets are also known for use of Persian knot in their weaving. This knotting technique involves passing the yarn between two wraps to encircle one of them. It is also called as Senneh knot or an asymmetrical knot. The use of Persian knot in carpet weaving provides capability to the weavers to workout higher knot density and more detail in designing.

This knot is used in workshops in Persia, Turkey, India, Egypt and China. Technically this knot is made making use of color codes in weaving. The yarn marked with red is looped around a wrap of thread marked with yellow color and there is an upper wrap. The weft is marked with a blue color. There are many aspects of Persian carpets which are different from other variations of rugs. A Persian rug have high use of ornamental designs and floral representations. These rugs have four major layout patterns namely central medallion, all over, one sided and compartmental patterns. The asymmetrical designs in some of these rugs are called unidirectional or one-sided.

The Persian knots are well complimented with the use of ornamental and diversified motifs. The motifs are simply designs and patterns used in weaving of the rugs. Some of the popular motifs of these rugs include Boteh, Gul, Rosette, Herati, Shah Abbasi, Mina-Khani, Azari Kharchng and Islimi Floral. Persian knots are not only used specifically in Persian rugs and carpets but also in other kinds of rugs. The detailing in weaving and higher density of knots make them all the more demanding and admirable.