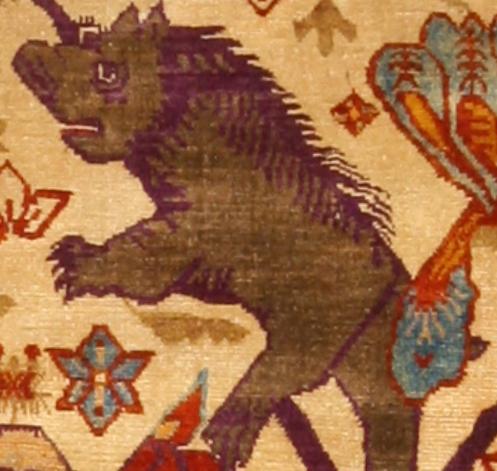 There are 22 carpets that I have kept to myself over the years.  They are all rare, some are priceless, and all of them depict animals.  Although I keep them for my private enjoyment, I think it is time I shared some of them with you.

Let’s start with the most unusual carpet I have ever seen.

Its origin is a mystery.  None of the experts, including myself, can explain its colors and design.

I will never sell it.  Is it the rarest carpet in the world?  To me, it is.  Because of the animals, the colors, and especially because of the way I found it. 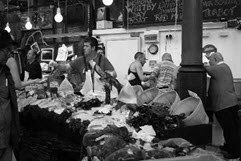 “Get your hands off that rug!”

The old silver dealer glared at me, his thick arm waving me out of his stall.  I had dared to peek underneath his pile of silver to try and glimpse the rug that was protecting it from the rain.

It was about 7:00 a.m. on a rainy Friday morning, in the Bermondsey Market, one of the most famous antique markets in Europe.  I was 20 years old.  My younger brother, Daniel, and I had scoured the market searching for treasure – an unusual rug that someone had just possibly overlooked.

Then I spotted the silver vendor in a beat-up stall at the far end of the market.  An old rug was thrown over his candlesticks and tea-trays to protect them from the rain.

He was a tough-looking bird, a real Cockney with wiry arms and grizzled grey hair.

I tried to separate the layers of carpet so I could get a peek.

“Get away from that rug!  It’s rubbish!”  He glared at me.  I obviously wasn’t a buyer, and I was damaging his merchandise.

“Just let me see it, please,” I said.  I stooped down and fumbled to separate the layers of soaked carpet before he chased me off.

He was coming out of his stall with a raised stick in his hands.  Desperate, I yanked open the sopping layers of carpet and stood staring at the most beautiful designs I had ever seen.  I think I stopped breathing.

I quickly put the rug back.

The dealer calmed down as soon as he saw me back off.

I was nervous and sweating with excitement.  Suddenly I heard myself say, in a pure Cockney accent, “Come on mate, you gotta be joking.” 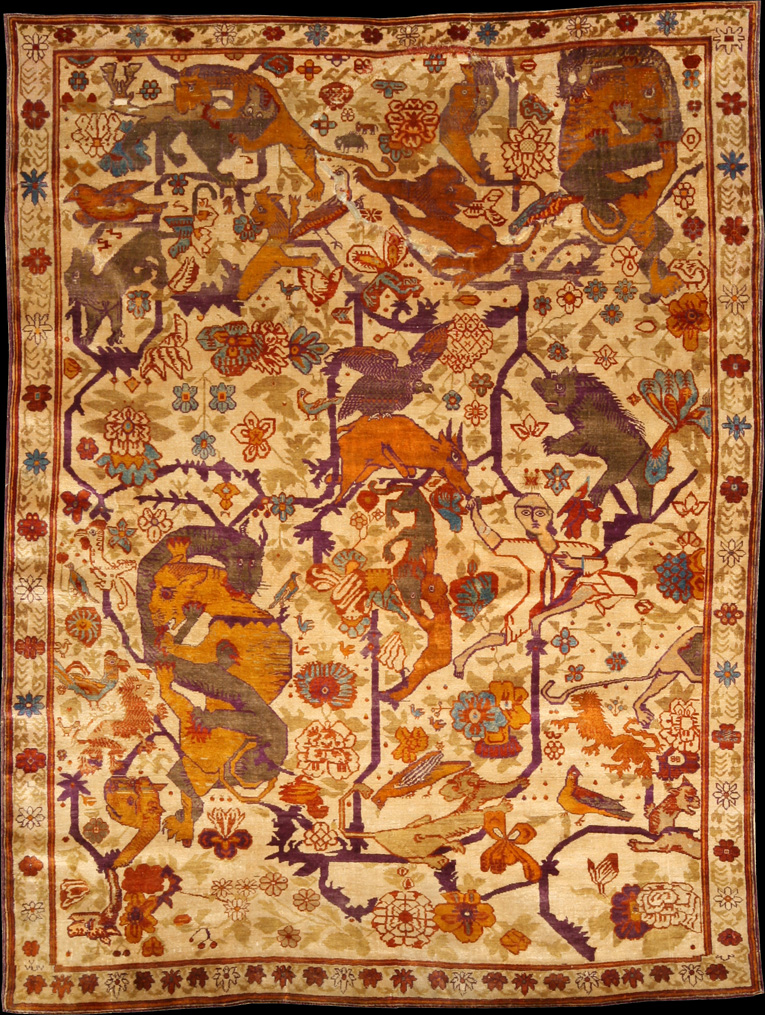 It wasn’t until after bringing the rug to my father’s warehouse and seeing the impression on my father’s and my grandfather’s faces that I realized what an important piece of art I had found.

They both had extraordinary knowledge, but more importantly, they had a love for rugs.  It was in their veins and blood, as it continues to be in mine.

But being reserved, understated people, they just said, “Yeah, it’s OK.  Just put it in the corner.  You can wash it next week.”

But I had seen the light in their eyes.  I was a little disappointed that they hadn’t made much of my find, but I came to understand that their love and their pride in me was not based on my ability to make money or find a deal.

The Experts were Dumbfounded

I showed the rug to academics in the rug world, but I felt they were dumbfounded.  Through books and museums, I tried to find a similar rug, but I never did.

For a close example, although the rug is century older, see here.

Since we really couldn’t track down what it was, my family decided not to market it for sale.  The rug became my personal property once our family was no longer involved in a partnership.  At that point I decided never to sell it.  Sometimes I don’t know if it’s the rug I love as much as the way I bought it.

I used to be afraid of animals.  When I lived in Iran we never had domesticated pets – all the animals were wild dogs or cats. So as kids we were always warned to stay away from animals.

With this rug, I got over my animal complex.  I’m making up for lost time.  Now I can’t get enough of them.  All 22 of my rugs have crazy, fantastic animals in them.

I personally like the way the animals are shown in rugs as opposed to other art forms.  The animals are not so abstract.  They look more story-book.

What I love about this rug, is that even though the animals are vicious and violent, and their faces are very angry, I can’t help feeling amused by them. 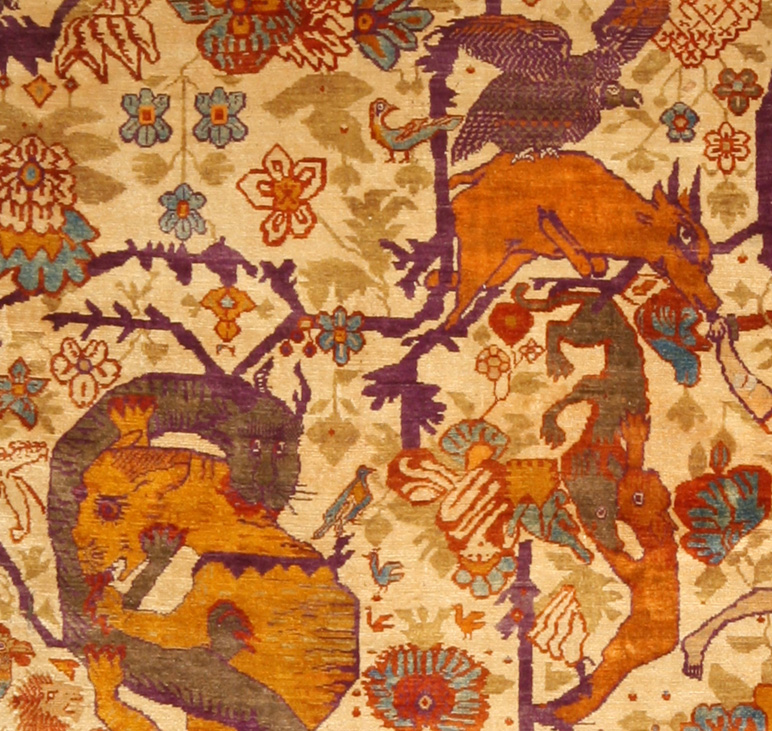 Because, in a way, the rug doesn’t take itself seriously, and the sense of whimsy is almost hilarious.  Every time I think about the animal faces, it puts a smile on my face.

This rug is an animal kingdom.  There are 24 animals, 18 birds, and 2 butterflies.

The rug is like a trip to the zoo.  Except, while you never quite know if the zoo animals want to come out and say hello, these guys aren’t hiding. They may be playing, they may not, but they are ready to amuse you.

My favorite animal by far is the boar. 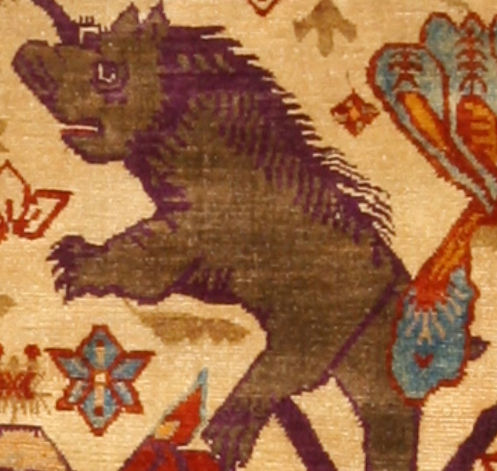 My private name for him is Kchersci – “Fatso” in Farsi.

The fact that Kchersci is standing, almost isolated, makes me empathize with him.  Is he lonely? An outcast? An individualist?  I don’t know, but I feel for the position he takes.

I love the color purple.  The boar and all the branches in the rug are purple.  The color has a lot of significance in Kabbala.

Purple represents royalty, (it was Cleopatra’s favorite color) and whenever I look at the rug, it gives me the feeling that this was done for royalty.  The color purple also has other significance, it is associated with wealth, spirituality and power.

The purple branches are very unusual.  I haven’t seen branches of trees that are purple in other rugs.

I love anything that is asymmetrical..

Look at the wild dog.  His body is not all there.  In 20th century rugs, the creators were so interested in perfection, they would never show half his body, they would think that’s wrong.  Why would this rug showcase a creature whose body is only partially depicted?

All the primitiveness and imperfections of this rug make it perfect for me.

Look at the animal above the wild dog.

We see half his back with this tail – who is he?  Is he going home, or going away?  Perhaps he had a quarrel with the golden creature below, who may be seeking to bite his tail.  Either way, this again signifies the perfection of imperfection. 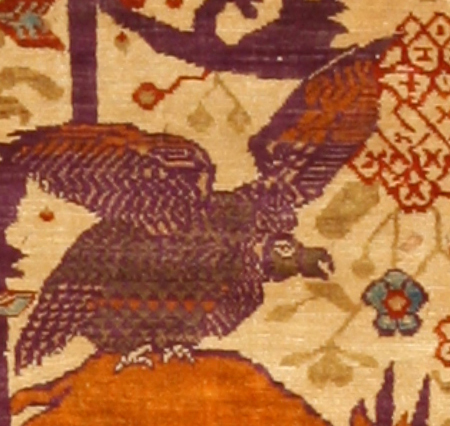 Look at the big bird –   a real character and a bit of a philosopher.  He too has purple in him. Is he royal?  I like the fact that is taking advantage of the animal under him and he’s getting a free ride.

He may even be flapping his wings and crying out, “Come now, go faster!  I’m a busy one, and I have places to go and creatures to see.  Hah!  It’s so difficult getting things to go my way…”

The expression that I get from the animals is that they are all trying to run away from something.

It’s a chase, and they’re trying to run each other off.  Or at least around the tree.

The only ones that seem to be harmonious are the birds.

Almost all the animals, except Kchersci, are in flight.  (To be fair, Kchersci would need an Albatross’s wings to get off the ground.)

And they look surprised, sometimes I think they are laughing.

The animals in the rug have such power that they bring

to mind one of my favorite movie scenes:

The power and movement of the animals add to my love for this rug. 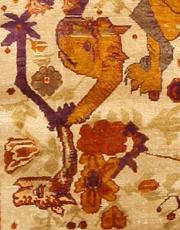 At the bottom left, there are two devil heads coming out of the purple branches.

These make me laugh.  For devils, they certainly are not the most threatening demons that they could be. They even blend in well amongst the other animals.

And the fact that I can’t link the devils to what was behind the imagination of the person who made this rug, makes it all the more exciting and valuable to me.

Marvelous and Strange and Curiously Modern

In certain areas of the rug the designs are all packed together, almost crammed into one another.  As if they were camouflaged.

Notice that the purple lines are branches, and all the animals are hanging on to these branches.  This is a highly unusual design; I haven’t seen one like it.

And I’ve never seen a geometric flower on a rug of this kind.

However, I’ve seen it in 20th century decorative art.

The flowers coming out of those branches are hard to identify – even by experts.   Are they daisies?  Lilies? Long gone flowers, that we perhaps will never know the names of?  I can’t be sure, yet they are wonderfully strange to me. 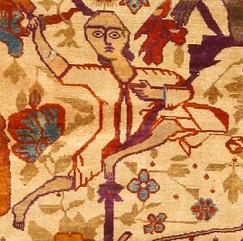 And what about the person in the rug?

He is almost Cubist.  He looks as if he is hanging onto the tree for dear life.  Perhaps he is saving himself from the animals?  Maybe he was the royal zoo-keeper, and the animals got away from him.  Or perhaps he fancies himself a dancer, leaping into mid-air and then grasping on the tree while he holds his pose.

He certainly seems calm about it.  Or perhaps resigned.  Or perhaps he is meditating, and has reached a level of enlightenment and calm that many of us only dream of one day achieving. 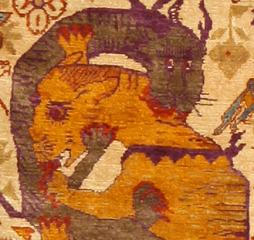 And how curious that the two creatures locked in genteel combat should be the Dragon and the Tiger- modern-day symbols of the rising empires of China and India.  Even curiouser are the curves of their bodies, swirling around so they almost appear to be one entity.

A MYSTERY THAT WILL NEVER BE SOLVED

The whole rug is a mystery that will never be solved.

We have no idea what the artist was thinking of – it is a story that will never be told.

We cannot know for sure – when it was made, or due to its weaving technique, its place of origin.

The fact that I have never seen something like it from this period makes this design even more special to me.

I take it out about once every six months just to look at it.

Not only is it one of the rarest carpets in the world, it was my first “real steal.”

When the family partnership dissolved in 1997, this rug was the catalyst for me to start collecting antique rugs that have funky, fantasy animals in them.

This is the jewel of my collection.

WHAT WE KNOW OF THIS RUG:

The rugs of the Deccan kingdoms emulated the brilliance of the Mughal court designs, but were also influenced by the close trade links with Persia.  Their revenue exceeded that of all of the Mughal provinces.  The tradition of carpet weaving continued in the Deccan after the Mughal Empire and through the establishment of the Eats India Company.

The animals in the Persianate Fantasy Animal rugs are found in a wide range of classical Persian carpets and art from the Timurid dynasty into the Safavid (1501-1722), periods. These animals are also seen in Mughal art from the 16th and 17th centuries.  The concept of a wide range of mythological creatures seems decidedly contrary to the “naturalistic” style that came into vogue around 1600, but the animals feature prominently in rugs from the period.