She established her namesake brand in 1965

The legendary antiques rug dealer Doris Leslie Blau died on January 24, according to an announcement from her namesake brand. “She founded Doris Leslie Blau in 1965 and quickly rose to be the darling of the design community with her unique character and acquisition of the most eclectic rugs,” Nader Bolour, the brand’s owner since 1998, wrote in an email blast. “She was an icon who shattered ceilings and left an indelible legacy. It has been an honor for me to have worked with Doris for the past 37 years and to be able to continue her legacy.”

Blau, who was briefly married to rug purveyor Vojtech Blau, established her own name in the antique rug business in the mid-1960s, followed by her own gallery on East 57th Street in 1972. “She opened up the gallery and from there she just exploded,” Blau’s longtime friend and lawyer Leonard Baum tells AD PRO. “She was an incredible sales person.” Blau was particularly regarded for her discerning eye. “From the beginning, she was determined to create something different, something a bit offbeat, which is evident from the outstanding collection of avant-garde pieces she managed to build over the years,” the brand states on its website.

Known for a top-of-the-line selection of Persian, Turkish, and Indian rugs (among countless other varieties), her gallery has sold to museums, royals, and many of the world’s top interior designers over the years. A 2002 sale at Sotheby’s of more than 200 rugs selected by Blau—which included a 19th-century Bessarabian Kilim, two rare American hooked carpets, and a Ziegler Mahal carpet from the late 19th century, all bringing in five to six figures—captures the prestige of her collection.

While the brand continues to offer exquisite and one-of-a-kind vintage and antique rugs, Blau and Bolour introduced a collection of contemporary carpets in 2001, which has grown significantly since then. The company has also released numerous capsule collections designed by A-list decorators, including Sheila Bridges, Thomas Jayne, Richard Mishaan, Daniel Romualdez, Jeffrey Bilhuber, Bunny Williams, and Michael S. Smith, who once referred to Blau as “the oracle of the rug world.” A Doris Leslie Blau rug can be spotted in the pages of AD with regularity, gracing Williams’s own home in Manhattan and a Chicago penthouse by Smith, among many other projects.

Responding to the news of Blau’s passing, Williams wrote on Instagram: “I learned everything I know about rugs from Doris. When I was a young designer, she would spend hours showing me her favorite rugs. I will never forget her and all she taught me.”

Currently, Doris Leslie Blau’s showroom is located at the Interior Design Building at 306 East 61st Street in New York, and the company has a presence at the the Washington Design Center in D.C. and the Watson Smith showroom at the Mart in Chicago. 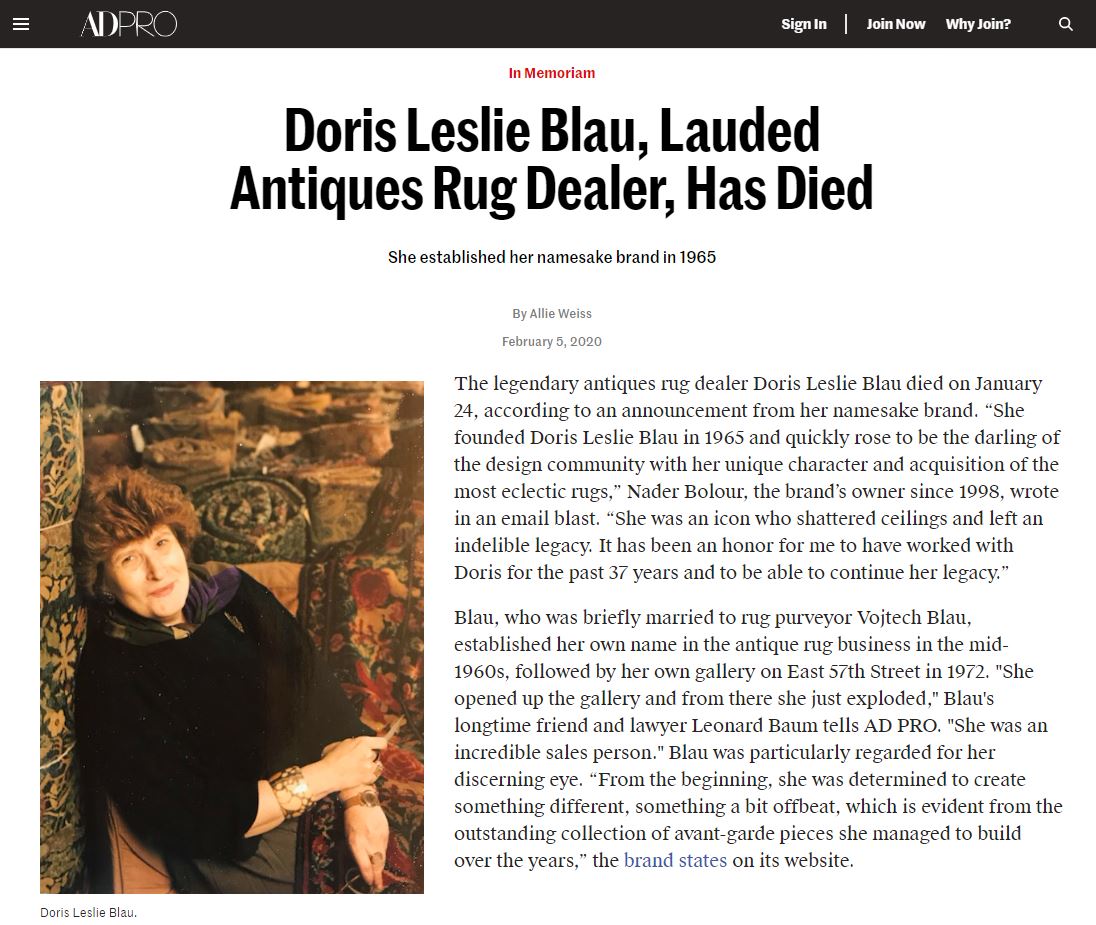