There are over fifty Chinese Art Deco rugs in the collection at the Doris Leslie Blau Gallery. Remarkably vibrant and durable, these infrequently studied rugs are representative of one of the most unusual confluences of Eastern and Western styles in the history of rug making. 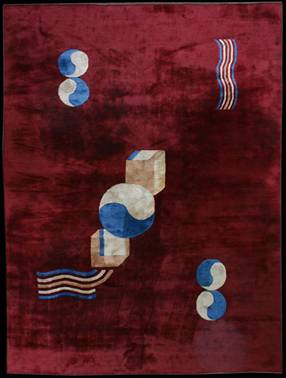 There are over fifty Chinese Art De’co rugs in the collection at the Doris Leslie Blau Gallery. Remarkably vibrant and durable, these infrequently studied rugs are representative of one of the most unusual confluences of Eastern and Western styles in the history of rug making. Calling such rugs &quot,Chinese Art De’co&quot, is slightly misleading since these rugs are not entirely &quot,Chinese&quot, in style, nor entirely Art De’co. When these rugs were produced in China in the 1920s and 1930s there was no major Art De’co movement In China as there had been in the west.

Further complicating categorization is the fact that they were largely produced for export to America and Europe, which meant that traditional Chinese designs and color palettes were often altered to suit western aesthetic preferences. However, it is worth noting that even though some designs were sent to China from the West, and many westerners were operating rug factories, most of the rugs were made by Chinese designers either working on their own or for a workshop.

Antique rugs, which may be referred to as Chinese, are not necessarily those that were made in areas of present day China, but they are generally understood to be those that are Chinese in character and design from nearby geographical regions. Given the centuries of change in leadership and cultural exchange along the Silk Road, Chinese rugs reflect a multitude of influences. The gradual combining of Buddhist, Confucian, Islamic, and Taoist symbolism with designs and weaving techniques from Persia, India, Mongolia, Turkestan, and Tibet resulted in a unique Chinese style. 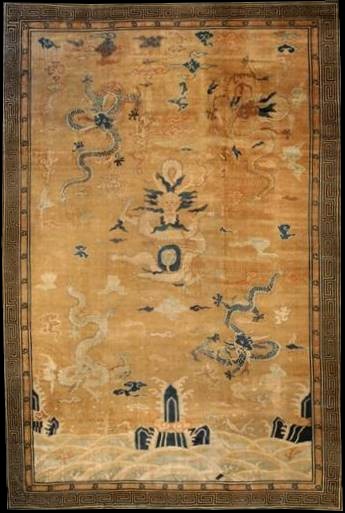 While much is unknown about the earliest use and production of rugs in China, there is evidence that woven rugs from Persia were imported to China during the realm of the T’ang Dynasty from 618 to 906 AD. With the rise of the Mongol Empire and the subsequent rule over China by Kublai Khan in the 13th century, there was a flourishing of trade and crafts, which included the production of rugs. Under the more xenophobic Ming rulers, Chinese rugs began to be more widely produced with characteristically Chinese designs, colors, and symbols. This growth in rug production was part of an even greater resurgence in Chinese arts and crafts, which continued during the rule of the nomadic Manchus from 1644-1912. The Manchus great admiration for rugs resulted in the development of regional styles and a more diverse market for rugs in China.

By the early 20th century, prior to the Japanese invasion of China, there were over 600 factories making rugs for export in China. Due to the inexpensive cost of labor in China, designers and entrepreneurs flocked there from Europe in the late 19th century. The sudden influx of foreigners, coupled with high western demand for oriental rugs, contributed to a great amount of experimentation in the designs and techniques. The production of rugs in China increased even more after trade routes from Turkey and Iran were interrupted by World War I. The high degree of experimentation embodied in Chinese rugs complemented the spirit of the 1920’s when there was a great desire for a break with the past in design. 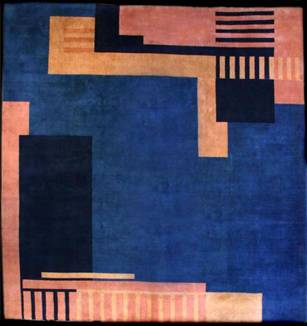 While some Chinese rugs were brought to the United States via soldiers returning from fighting in China, many more were purchased by Americans from department stores such as Wanamaker’s and B. Altman &amp, Company.

Among the two largest exporters of rugs in China were the America expatriates–Helen Fette and Walter Nichols. Although competitors, both manufacturers produced handmade wool pile rugs that adapted Chinese designs to western tastes. Some of the rugs from the factories are even so similar that the manufacturer can only be determined by labels or stenciling, Nichols rugs are often unidentifiable now due to the fact that his records were almost all destroyed during the Japanese occupation and also due to the fact that their white cotton fringe has worn away where he had stenciled &quot,HAND MADE IN CHINA.&quot,

Helen Fette was a missionary in China, who began producing rugs around 1920 in Peking in order to help provide employment for the local populations and to offer famine relief. She partnered with Li-Meng Shu, forming the Fette-Li Company, and by the late 1920’s and early 1930’s her company was the largest producer of rugs in the Peking area. Although there were many design similarities between Nichols and Fette-Li rugs, the rugs made by the Fette-Li company were generally thinner and more pliable, especially her early rugs in which the foundation threads are side by side.

Walter Burns Nichols (1885-1961) moved from America to the Northern port city of Tientsin (Tianjin), China in 1920 where he established a reputation for himself as an excellent wool grader at the Elbrook wool exporters. After gaining a firm understanding of the rug trade in China, he opened up a factory in Tientsin in 1924 to make closed-back rugs, employing a mechanized wool spinning technique, and using high quality chemical dyes from Germany. In his first brochure, he declared immodestly that: &quot,In 1924 W.A.B. Nichols of Tientsin, North China, introduced the Super Chinese Rug which has become world famous. It is known in every market as the most durable and beautiful product of the modern Chinese weavers art and adorns the homes of people all over the earth.&quot,1&nbsp,&nbsp,So popular were rugs produced by Nichols’ factories due to their durability, quality of design, and the sheer number of their production that Chinese Deco rugs were also commonly called &quot,Nichols rugs&quot,, even if they were produced by another manufacturer. &quot,Nichols Super Yarn and Carpets&quot, as his company was called, had showrooms and agents all over the world, including Australia, Panama, Honolulu, and London. At its height, his company was operating 14 rug factories in China, and exporting 30,000 feet a month through his American distributor, the Pande-Cameron Company, alone. 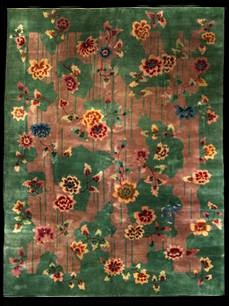 Nichol’s rugs are characterized by their thick and deep piles, closed-back knots, and their combination of eastern and western design motifs. Although he initially used vibrant chemical dyes from Germany such as emerald green, canary yellow, turquois, and magenta, toward the end of the 1920’s his palette became more muted, and his designs more simplified, in order to cater to the demand of his primarily American buyers (Buyers also had the option of commissioning rugs from Nichols based on their unique preferences). In place of Chinese symbols and traditional symmetrical designs within borders, Nichols and other Chinese Art Deco rug designers began to employ more asymmetrical designs, monochromatic color schemes, and repeating geometric shapes or simplified floral motifs.

Interestingly, it has been suggested by Elizabeth Bogen, a scholar of Chinese Deco art, that the bright colors, curvilinear lines, and eastern botanical elements that characterized earlier Chinese Art Deco rugs were drawn from the Japanese motifs that were then being adapted into French Art De’co design. The rug in Figure 4 exemplifies this particular design trend — its allover field of stylized Asian-inspired vinery and flowers reflects the Japanese design elements, whereas the loosely suggested borders and unusually-green patches of color reflect the more western tendency toward abstraction. 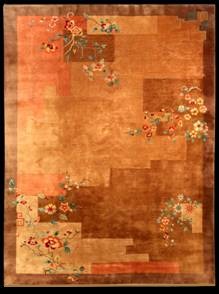 In figure 1, the Chinese Yin Yang symbol has been simplified and placed on an unusual dark red field alongside stylized lines and geometric motifs. The colors are more modern and the asymmetrical composition and open field more in line with contemporary western tastes. The traditional Chinese rug colors of indigo, cream, black, brown, yellow, and orange are not those primarily utilized in Art Deco rugs.

In light of their nearly complete avoidance of traditional Chinese colors, symbols, and animals, the four illustrated Art De’co rugs were likely produced after 1927, which was the year the rug salesmen at the B. Altman &amp, Company department store told him that their customers wanted rugs without animals, bright colors and confusing Chinese symbols. 2 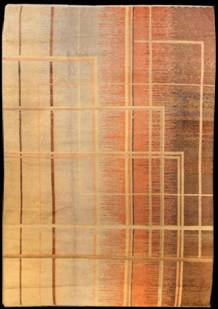 During the 1930’s rug production began to decline in China due to the Great Depression in America. Walter Nichols went bankrupt, started another rug company and then fled to Mexico shortly after the Japanese invasion, which resulted in the cessation of exports from China from 1941 to 1946. After rug export resumed with the end of the Second World War, Nichols enjoyed another brief resurgence in productivity, but his attempt at success was thwarted again by the Communist takeover of China in 1949. Although the period of Chinese Art De’co rug manufacturing was brief, a review of its history reveals the extent to which current events can lead to a new artistic production and a fascinating exchange of cultures, ideas, and aesthetics. Nichols’ words from his 1924 brochure are highly emblematic of this dynamic period of blending of the new and the traditional and the eastern with the western in rug making: &quot,Too much cannot be said about the beauty and interpretations of Nichols designs, for in this designs is woven the culture, beauty, and heritage of China. The designs have been gleaned from Palace rugs, porcelains, temple decorations and bronzes, the old containing an admixture of the new thus modernizing the design and making the rug a thing of beauty for the western home. We maintain a staff of skilled artists who are always on the alert for something new and who combine the best elements of the Chinese and Western designs into a harmoniously blended whole.&quot, 3 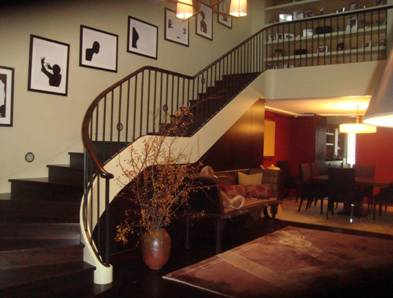 Due to the fact the 20th century design is currently fashionable, Chinese Art De’co rugs have once again become a more popular interior design element. Many of the more colorful designs from the early 1920’s or 1940’s best function as a foundation of a room, they give a sleek and modern space a jolt of color and their designs add a bit of excitement to a space. For a more monochromatic design scheme, a Chinese Art De’co rug from the late 1920’s or 1930’s might be more suitable as they were more restrained in their colors and design motifs. Rather than a starting point in a design, these more minimalist rugs can more often being incorporated into an interior last. 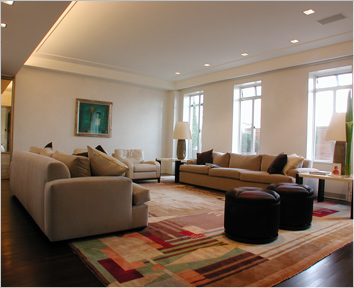 The room designed by Studio Luxe in Figure 8 is an excellent example of how a Chinese Art De’co rug can be used as a highlight in a modern interior. While the colors in the rug add a bit of warmth and life to the room, its simplified geometric design perfectly complements the modern furniture and minimal wall furnishings. The soul of this room is definitely in this carpet.