The weaving tradition has a great role in a small communities, where it’s often a part of the cultural identity. While almost every culture in the world was able to develop their own weaving techniques, the vast majority of antique rugs are woven in similar fashion, set by famed Persian carpets and established centuries ago. However, despite this, some societies were able to achieve originality and differentiate themselves from the mainstream.

They might lack the homogeneous look and classical appearance of city carpets, but at the same time they are delightfully decorative, often complementing Art Deco-inspired interiors. Thanks to their diversity, everyone can appreciate the beauty of Tribal rugs. The number of colors and designs makes them suit any kind of interior, from modern to rustic. Collectors and connoisseurs can find them especially attractive, due to their high collectability and relative rarity.

Indigenous Moroccans, Kurds, Azeri Turks and other tribes produced highest quality rugs admired by many. Thanks to their distinct colorings, symbols and unique patterns, tribal rugs earned themselves a group of loyal admirers, as those features make them truly unique and in a way, pure. Each tribe has their own techniques, passed on from generation to generation.

During their journeys, the nomadic peoples use portable looms in order to weave. Their size and weight is the reason why the majority of tribal rugs are relatively small, comparing to other types of carpets produced in the cities such as Tabriz or Kerman. The weaver designs each rug individually, incorporating his or her own tastes. Because of that, the tribal carpets are usually more geometric and colorful than the city rugs. 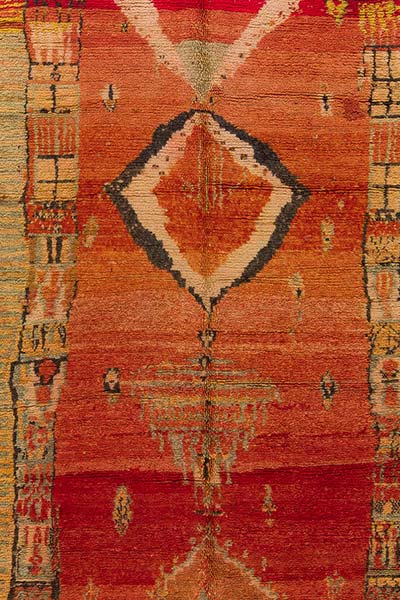 The greatest difference between rugs made by tribal communities, such as Moroccan nomads, is that they are often made by craftsmen who were never educated in schools. Instead, those men and women carried on the traditions passed from generations to generations. As a result, their artworks might be described as primitive, but have an air of sophistication to them, the one that comes with countless years of knowledge – ancient yet modern. As tribal rugs are not made for commercial use, they often feature symbols known solely by the peoples who wove them. This is especially the case of carpets made for bride’s dowry. It is not unusual for the weaver to incorporate motifs standing for fertility and happy love life.

Few items can express the spirit of tribes’ culture as clearly as carpets. Their rich colorings and patterns tell the tales which were passed on from parents to their children since the times immemorial. The sheer passion with which rugs are made continues to inspire contemporary designers and helps raise awareness of modern tribes.