Indian rugs are decorative fabrics originating from the territory of India. They fall into many subcategories depending on the particular weaving center. Agra, Amritsar, and North Indian are the most popular. Indian carpets usually carry complex botanical patterns that reflect the beauty of exotic nature. Dhurries are flat-woven Indian rugs. 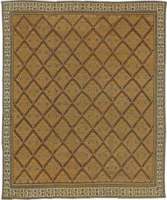 The History of Indian Rugs

The exact origins of Indian rug weaving are a mystery. It is possible that the craft started in the 11th century when first Muslim conquerors, the Ghaznavids and the Ghauris, came to India from the West. With full certainty, we can trace the beginnings of antique Indian rugs to the early 16th century. Scholars attribute the emergence of the craft to the Mughal Dynasty. The last successor of Timur, Babar, extended his rule from Kabul to India and established the Mughal Empire. However, it wasn’t until his later successor, Akbar, that the Indian carpet industry begun to flourish.

The History of Indian Rugs – Akbar the Great

Akbar definitely earned his royal nickname ‘the Great.’ He was a wise man of strong personality, and thus a successful general who further enlarged the Mogul Empire. Nonetheless, what he managed to achieve and is mostly remembered for is the evolution of culture and economy. In order to maintain peace in the culturally diverse land, Akbar granted everyone freedom of religion. Instead of chasing dissenters and mongering wars, he focused on nurturing arts and crafts. Rug-weaving was of great interest to this undisputable beauty lover. He brought to India the finest Persian artisans. Because of that, Indian rugs initially carried classic Persian rug motifs and resembled them in style. Nonetheless, in time the Persian influence blended with the indigenous. Indian rugs gradually acquired their own, unique character.

The first weaving centers appeared in Agra, Delhi, Fathpur and Lahore. But that was just the beginning. Between 1520-30 Akbar wisely reformed the system, organizing weaving trainings for… the prisoners of Agra. It turned out to be an excellent idea, proving once again the wit and compassion of the great ruler. Prisoners quickly became proficient, some even outgrew their masters! Indian Jail Rugs or Indian Prison Rugs quickly gained broad recognition.

Antique Indian rugs created during the time of Akbar’s reign bear the name of ‘Mughals’.

The History of Indian Rugs – Jahangir and Shah Jahan

Akbar’s successor was his son, Jahangir. He clearly took more over his father than just the throne. Jahangir continued to sponsor and encourage the Indian rug industry. Indian rugs of his time reflect the ruler’s fascination with wild exotic nature. Lush florals, herb motifs, and the color palette of earthy shades with vivid greens and blues prevailed. With Jahangir in charge, Indian rug design entered its classical phase. Indian motifs were less abstract and more life-like than Persian. They were so refined and beautiful that the demand for them arose abroad. This fueled the development of the weaving industry which then experienced its heyday.

Shah Jahan, the next Emperor, was yet another patron of arts, worthy of his predecessors. He is now best known for his achievements in the field of architecture. His greatest one was indisputably Taj Mahal – an immense and astounding palace-like tomb of his beloved wife Mumtaz Mahal. Shah Jahan also left a mark on Indian rug designs. Under Jahan, Indian rugs naturally extended to picturing landscapes and scenic themes (but still keeping the enchanting floral accents). In the meantime, also mythical animals showed up, introducing to Indian rugs a specific fairy tale-like atmosphere. With all these dragons, beasts and exotic fauna the Indian design gained a truly magical character.

With the dusk of the Mughal Empire, by the 19th late century the Indian rug industry had also declined. It was to such an extent that the British colonial administration decided to set up new factories. Following the steps of Akbar the Great, the British also turned to prisons for human resources.  After gaining Independence, India continued the centuries-old weaving tradition, although many weavers moved to Pakistan. Presently, some Indian weaving centers stick to traditional designs. However, many use foreign designs or design copies, and produce commercial rugs of mainly utilitarian value.

The Style of Indian Rugs

At first, Indian designs were variations on classic Persian floral, garden and hunting rugs. Jahangir (reigning from 1605-1628) was an eminent patron of the arts. He possessed deep love for the beauty of nature, influencing the artists of his court. This resulted in naturalistic floral patterns that were almost life-like. Millefleur and nature-related motifs appear also on modern Indian carpets.

Antique Indian rugs used an exceptionally intricate weave. After all, they started off as copies of fine Persian rugs. A single one could consist of exactly 4224 knots per square inch! The whole making process was so complex, that some of these antique carpets required 15 years or more to be completed. One can notice that their soft wool and silk warps change the colors across the width of the carpet giving the impression of the rainbow bands. A myriad of fine flower heads connected by fine vine work often covers the field.

High-quality Indian rugs use top-notch wool, like cashmere and silk. Some exclusive specimens from the past contained golden threads and even gemstones.

Antique North Indian rugs were products of a cottage industry controlled by families of carpet weavers. They usually had piles knotted of the softest pashmina wool. The antique North Indian carpets are to this day of exceptional quality.

An Exceptional Collection of Vintage & Antique Indian Rugs for Sale 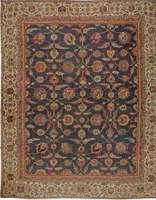 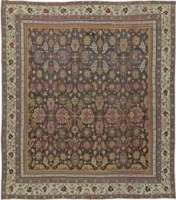 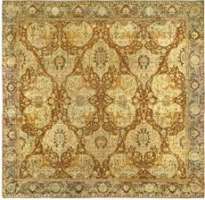 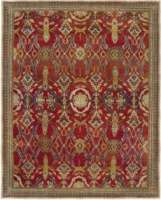