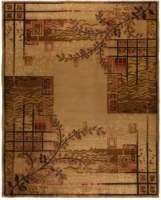 The year 2021 marked the 96th anniversary of the Exposition Internationale des Arts Décoratifs et Industriels Modernes, in Paris, the event that inspired the term “Art Deco.” Short for Arts Décoratifs, the term indicates the eclectic decorative style that had reached its pinnacle at the 1925 exposition. Although the term was coined in the 1960s by the American art critic Bevis Hillier, and grew out of the rectilinear compositions of the Viennese school, the emphasis on craftsmanship of the Arts and Crafts movement, and the industrial solutions of Jugendstil (German Art Nouveau), the style varied across Europe, where opinions strongly diverged as to the relationship of design to art and industry (Art Deco and Modernist Carpets by Susan Day, London, 2002). In contrast to the curvilinear organic forms of the turn-of-the-century Art Nouveau movement, Art Deco drew from a multitude of styles such as Constructivism, Cubism, Modernism, Neoclassicism, and Futurism, with each major center of design and arts offering unique interpretations of these contemporary developments.

By the 1920s, the perception of rugs in European society had changed remarkably due to their ubiquity in the homes of the burgeoning middle class in Europe. Their status as an art form had been bolstered by William Morris in the late 19th century, who greatly admired the craft and who created his own rugs, some of which were inspired by certain Persian rugs. Although carpets continued to be made in traditional styles, the early twentieth century witnessed a dramatic shift in design as the avant-garde movements in the arts and the rise of industry influenced all areas of design, from the graphic arts to architecture and furniture, including rugs. Some rugs of the 1920s may reflect an influence of traditional local folk arts, as in Swedish and Finnish rugs, whereas others may draw more from industrial forms, or from the arts of Egypt and Morocco. In the United Kingdom, Arts and Crafts still prevailed in design as the British looked unfavorably at the Art Deco rugs of France. Although there were a few Art Deco designers in Britain, the British transition to Modernism from Arts and Crafts was relatively rapid as younger designers altered their focus toward more Functionalist principles and simpler compositions and hardly noticed the linearity, geometric shapes, and intense colors that mainly characterized Deco style.

In this collection, a variety of rugs have been brought together that reveal the different regional approaches to rug design that occurred during the first half of the twentieth century in Europe. The collection is primarily composed of Swedish and French Art Deco rugs because each country’s response to the influence of the Arts and Crafts movement and the Viennese school significantly differ. A selection of Donegal and Viennese rugs, including a few exceptional rugs designed C.F.A. Voysey, are included in the collection in order to further illustrate the range of regional styles that characterize the Deco movement. In France, the creation of decorative rugs in Aubusson and at the Savonnerie continued during the early twentieth century, while a smaller number of manufacturers and artists began experimenting with more flamboyant and ornamental rug designs that complemented the spirit of modernity and met the demand of the middle class for luxury carpets. It is these designer rugs that are the epitome of the Deco style, although an overall shift in French Art Deco rug designs from primarily floral, figurative, and medallion compositions to more minimalist or abstract rug designs began to occur by the late 1920s as the Functionalism of Modernism began to shape the industry.

Among the most well-known Art Deco rug designers in France were Ivan Da Silva Bruhns (1881-1980) and Paule Leleu (1906-1987). The linear rugs designed by Ivan Da Silva Bruhns drew their inspiration from Oceanic, African and Pre-Columbian arts, in contrast to those by Leleu, who generally favored symmetrical arrangements and repeating geometric motifs. The French demand for designer rugs in the 1920s was so great that Da Silva Bruhns opened his own workshop and French department stores added rugs designed by artists and designers to their collections. The major Parisian store à La Place Clichy concentrated on Oriental rugs starting in the late 19th century but began also commissioning rugs in the 1920s by many well-known Modernist rug designers such as René Crevel, Edouard Bénédictus, and Emile Gaudissart.

By the turn of the 20th century, the rug-making industry in Sweden was flourishing as a result of a large number of architectural and shipbuilding projects that required rugs for their designs. Among the most famous of all the Swedish Art Deco rug designers were Märta Måås-Fjetterström (1873–1941), whose designs primarily combined traditional Swedish design motifs of ryas with modern elements, and Barbro Nilsson (1899-1983), who took over Fjetterström’s workshop after her death. Extolling the talents of her contemporaries, Fjetterström wrote in 1914 after seeing a craft display at the 1914 Baltic Exhibition that “Swedish textile artists had attained such a level of excellence that they could only be compared to themselves. They had no international competitors.” (Märta Måås-Fjetterström, Märta Flies Again! By Mårten Castenfors, Stockholm, 2009, p. 6). By 1934, an exhibition of her own rugs at the Liljevalchs Konsthall in Sweden had firmly established her own reputation as a textile artist of global standing.

Fjetterström’s rugs are unique and can serve as an example of how Swedish rug production differed from that of the French during the first half of the 20th century. Whereas the French rugs were still ornamental and a luxury designer item, those in Scandinavia were more often more restrained in their patterns and palettes. Initially inspired by the Arts and Craft movement, Fjetterström’s hand-woven rugs often reveal the influence of Art Nouveau, Swedish folk, Persian garden carpets, and old Norse ornamentation in her designs, but they never appear to be direct copies of any other designs. She had a unique talent for transforming designs and modernizing traditional motifs. So successful was Fjetterström at her craft that she exhibited her rugs globally, including twice at The Metropolitan Museum of Art, in 1929 and in 1937.

By the mid-1930s, handmade rugs declined in popularity as the anti-elitist rhetoric born out of the destruction of World War I gained strength. The demise of luxury goods, including handmade carpets, received a final blow as the Great Depression ravaged Europe and Modernist thinking attracted greater support. Function, economics, and simplicity accompanied Modernism in rugs as colors became more muted and compositions became more abstract. It was not until a few decades after World War II that scholars began to rediscover Art Deco and Modernist rugs, and it was not until more recently that this art form of the early 20th century has been rediscovered in the marketplace.

An Exceptional Collection of European  Vintage Deco Rugs for Sale 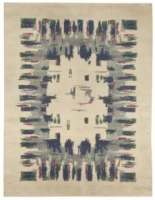 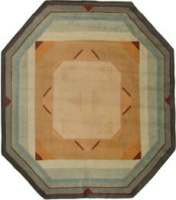 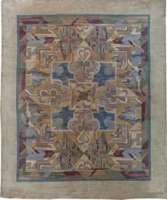