Hooked rugs are decorative fabrics made in a special hooking technique. Loops of yarn or fabric are pulled through a stiff woven base such as burlap, linen or rug warp. The tool used for that process is a crotched-type hook mounted on a handle for leverage. Hooked rugs are fruits of a domestic craft that have transformed into a veritable art form.

Rag rugs are made by tying together clippings of fabric or yarn using one of many techniques. The craft most probably developed as soon as people started manufacturing textiles. However, the first documented mentions about it come from the end of the 18th century. From a humble occupation, rag rug making has evolved to a popular hobby and prestigious art. 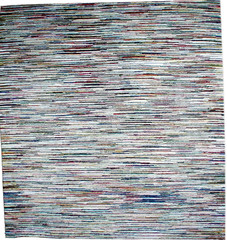 Exclusive collection of vintage Hooked rugs and oriental Rag rugs and carpets for sale in NYC. Rugs came to be as soon as people learned how to weave fabric for miscellaneous purposes. They have accompanied our civilization ever since as warmth bringers and space definers. Professional rug weavers created beautiful carpets intended for crowned heads and the wealthy. However, countrymen and poverty also took a huge part in the development of rug-making.

The matter of our ancestors’ domestic chores is relatively uncharted. It is because the chroniclers were not especially eager to describe mundane details of everyday life. At least not until the 19th century. The origins of vintage hooked rugs and rag rugs are hard to track down. There are few written records but also the question of prestige. In contrast to precious pile rugs, rag rugs were usually discarded after wearing out. Nevertheless, rag rugs and vintage hooked rugs have been an important part of all households, affluent and poor alike.

The History of Vintage American Hooked Rugs and Rag Rugs 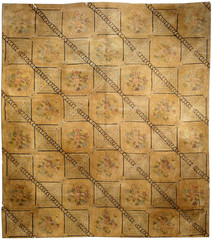 Cultures all over the world have always had ways of reusing materials. The production of goods in the past required much more effort and time than today. Rag rugs and vintage hooked rugs are paramount examples of traditional recycling. They were (and still are) made from discarded clothes, leftover scraps or clippings of fabric.

Little do we know about the craft before the end of the 18th century. According to Jenni Stuart-Anderson, the author of “Rag Rug Making”, these home-made textiles were first brought to Scotland by the Vikings, later to spread throughout the entire country. The author William Winthrop Kent believed that the earliest forebears of hooked vintage rugs were the floor mats made in Yorkshire, England during the early part of the 19th century. Workers in weaving mills were allowed to collect thrums, pieces of yarn that ran 9 inches (23 cm) long. These by-products were useless to the mill, and the weavers took them home. They pulled the thrums through a backing or tied them together.  The process gave the remnants of fabric a second life in the form of rag rugs or American hooked rugs.

Rug hooking in the present form might have developed in North America. The story likes to repeat itself, thus primarily this craft constituted the domain of the poor. About 1830 weaving centers began producing machine-made rugs for the rich. It is then the trend for floor coverings arose in the United States. Less wealthy had to use their skill and imagination to transform whatever they had into valid utilitarian object. Having no access to thrums, American women collected all kinds of fabric remnants. They served to create imaginative and beautiful American hooked rugs. Burlap was the most popular material for the backing of antique hooked rugs. Why? Farmers had plenty of hemp fabric practically off charge from old grain sacks.

Many of antique hooked rugs are of great artistic value. However, in the beginning it was not a craft of the rich. Girls from affluent families went to embroidery or quilting classes while fashioning floor mats was never on the agenda. Popular ladies magazines from the 19th century never mention vintage hooked rugs. Moreover,  people spoke of it as a “country” occupation in a derogatory sense. It was not until the beginning of the 20th century that the craft of rug hooking spread all over the country. Rug-hooking became one of the favorite pastimes of American housewives

Hooked rugs proliferated in regions where the climate was cold and economy limited. The making technique is quite simple. You have to pull a narrow strip of cut fabric up through a foundation material (typically burlap or linen) with a special tool. The emigrants from Northern Europe  who settled in New England and Canada brought along traditional crafts. That led to the evolution of handmade rugs that are now a significant category of American folk art. Antique American hooked rugs carry motifs inspired by the maker’s natural environment. They consist of fauna, flora and landscapes from the place of their creation.

From the early 1800’s through the middle years of the twentieth century people made rag rugs out of necessity. Nowadays, rag rugs and hooked rugs are not only a craft. They constitute a significant art that has influenced the world weaving tradition in general. Because of their authenticity and beauty, antique American hooked rugs and rag rugs are in high demand. 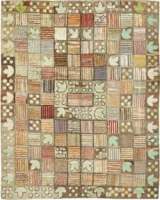