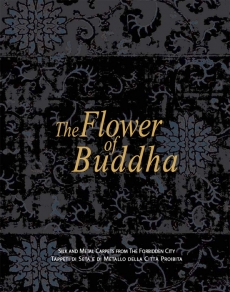 This catalogue brings the reader face to face with one of the most precious collections of Chinese carpets today in existence: the Silk and Metal Carpets from the Qing dynasty (1644-1911). This collection is one which dates back in particular to that period which runs from the Qianlong reign (1735-1796) to the very brief reign of the last Xuantong emperor(1908-1911). The presentation of these carpets is preceded, according to the scheme of classical Chinese composition, by an essay offering fascinating details on the imperial city of Peking, for which they were destined, and by a short story based on fiction.

The Qing who were of Manchu origin were also devout observers of shamanic as well as Tibetan Buddhist rites and were guided by the strong desire to feel themselves surrounded at court with those images and symbols that they cherished. The designs that were worked into the carpets therefore were generally based on precise cosmological scheme: the diagram of the five elements, fire, water, the earth, wood and metal, represented either by botanical figures or by animals which at one and the same time indicated the four cardinal points and the center showing the Middle Kingdom. The material used for the realization of the carpets was silk, the very essence of China. In rarer pieces, however, the insertion of gold, silver and copper, three metals to which therapeutic virtues were attributed, was of the order.

To a certain extent, there is a correlation existing between the grammar and the principles of Chinese textile art and those belonging to poetry. The three models of expression that are inherent in the art of composition: fu, exposition, bi, comparison, and xing, evocation, are the very same models used by the master weavers in carrying out their creations.

Like the poets, these incomparable craftsmen succeeded in expressing their sentiments and in rendering them objective by weaving them into the warp and the weft of the carpets (fu), putting to work their knowledge of the hidden properties of the materials and the comparison of the techniques (bi) and by the evocation of the imaginary by way of representation of myths and symbols (xing).

An intuition into the meaning of the carpet depends precisely on the revelation of the invisible world by which the visible one is surrounded, as is true of the theories having to do with Chinese landscape paintings whose significance is realized by way of the repetition of descriptions and images. These landscapes may either be lived visually or c o v e r e d or experienced by crossing. The same is true for the carpet. The person who is capable of full enjoying the carpet is that same person”… who succeeds in entering into the subtle and invisible dimensions, those which conceal sentiment, the soul of the original elements. He who succeeds in crossing the primordial oceans, see the dragon in the act of rising and the phoenix dancing in the heavens, or he who is capable of smelling the perfume of the mulberry that has nurtured the silk worm, the wind that has blown through the cotton fields, the hands that have gathered the cotton, have spun it and have woven it…”
(L’Esthétique dans la création textile chinoise, Paris 1923)

Aside from beauty itself, which in any case occupies an important position regarding the significance of the work, while it is true that the imperial carpet made of silk and metal, does not, strictly speaking, constitute a religious art work, it still should be looked at as an object of faith and veneration. Beauty and esthetic expression in the court atmosphere are subordinate to spiritual contents and to the exaltation of power. In interior decoration as well as in the embellishment of carpets it is dragons and phoenixes, symbols of the emperor and of the empress, which make their repeated appearances, and together, with them, all those symbols by which Chinese art and Chinese conceptualizations are dominated and through which the sovereigns can intervene to carry out their role as mediators of the cosmic order between earthly existence and the celestial forces.

Knotted into the carpets is a multitude of animals and fabulous birds and of lions and tigers, to which profound allegorical and mysterious meanings are attributed. The artistic contents and the esthetic value of these images should not be evinced by way of their representation of the animal world but rather in the world of myths and magic of which these prodigious creatures are emblems. In these symbols the primitive vitality is preserved, and through them antique tradition lives on.

Among all these figures, the one which stands out most is that of the flower. The carpets presented in this volume share a quite interesting, if not determinant characteristic with that form of Chinese poetry that is composed in observance of the ci style. This style of poetry, whose imagery calls for a description in minute details, is based on the exposition of a single idea. The dominant image present in the carpet is that of flowers. The flower theme is symbolic of the relationship with the absolute: the very essence of nature. If the cosmos is the manifestation of the creative energy, every tree, every plant, every flower is the concentration of the divine energy. There are however flowers which more than others, represent the absolute illumination, those forces that are not otherwise describable: the flower of the pomegranate and that of the lotus.

According to some traditions, the Great Mother goddess in her emergence from the sea, assumes the semblances of the lotus flower. A lotus flower that opens out upon the surface of the water is the symbol of the first manifestation of the supreme being; it is the gateway to the womb of the universe, which is represented as a thousand-petalled golden flower. According to Hindu tradition, it is the lotus flower which opens to give birth to Brahma the creator. Taoism associates the Golden Flower with the elixir of long life, in an initiator y text where the way to the immortality of body and soul is taught to the believer. The different varieties of the lotus flower symbolize for the buddhist different spiritual states. The white lotus is the image of the state of absolute mental purity and of the spiritual perfectness of Buddha. Its eight petals indicate the eight points along the path of the doctrine. The pink lotus is representative of Buddha, and among the esoteric sects it is reserved for the highest expression of the divinities. The red lotus stands for the great compassion of Buddha, as well as of the bodhisattva for all living beings. The blue lotus is never represented in full bloom in view of the fact that its center is not visible, as is true of the supreme intelligence.

In yoga, the levels which must be overcome in order to reach nirvana are indicated by lotus flowers which vary in color and petals and which are arranged along a central axis, above them the supreme white lotus with its thousand petals which contain all the sounds and all the forces of the universe; existence in its state of perfect purity, of light which is infinite, immutable and formless; the site of nirvana, the state of abolition of all passion and desire, for those who have achieved the status of perfect beatitude, freeing themselves from the bonds os samsara, from the succession of birth and rebirth.

Almost all the superior divinities of Buddhism are shown in the standing position or seated upon flowering lotuses. This flower, a support which symbolizes the state of total purity of the divinity, has numerous petals arranged in various rows, with the bottom-most row turned upside down to indicate the plurality of the universes over which the represented divinity exercises his reign. When the bodhisattva are seated with a dangling leg, their dangling feet are held up by a lotus in memory of the legend according to which these flowers bloomed at ever y step taken by Buddha; enlightenment is thus associated with a carpet of flowers.

A carpet bearing the lotus flower motive becomes in itself a transcendent vehicle between earth and heaven: the meditation carpets in the monasteries of Tibet, the flying carpets of oriental fables, the imperial carpets of The Forbidden City, in the knots that compose them, they reaffirm the sacred bond existing between man and nature.