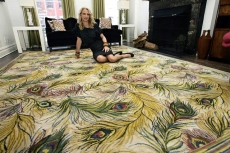 You admired hip designer Nanette Lepore’s peacock-patterned dresses, but they were so three years ago. Now you can resurrect the pattern for your floor.

Lepore recently introduced a bold-patterned area rug with her peacock design for the Doris Leslie Blau carpet gallery in New York. The gallery also in early March unveiled two nautically inspired rugs designed by Tommy Hilfiger (one blue with white anchors, the other navy with a red chain-link pattern).

In a phone interview, Lepore said she was approached by the carpet folks and is happy she did the project, especially since she now has one of her rugs in her own living room.

“The way it transformed my living room with color and a bold pattern, it would be fun to do more of that,” the designer said. In fact, she’s considering designing another rug for her pool table area that the public may see in stores someday.

What do those in the world of interior design think about fashionistas stepping in?

Filicia, who has also designed for celebrity clients including Jennifer Lopez and Marc Antony through his New York firm, Thom Filicia Inc., said the important thing in interior design is understanding people’s lifestyles, something fashion designers do well.

“A good designer can transcend from the area they are focused on into other areas and do it very successfully,” Filicia said.

But would he recommend consumers start buying area rugs based on what’s in their wardrobes?

Filicia said he wouldn’t go that far. Still, he has a new show on the Style Network called “Dress My Nest” in which he will use fashion as a springboard to help folks figure out interiors.

“I do think there’s a relationship. Saying you want to match your house to your clothes is too literal, but clothes do indicate your point of view, your aesthetic,” he said.

“Young and hip or traditional or conservative, you can tell when you see someone,” Filicia added. “And you get color from people’s wardrobes.”

Filicia will also soon launch a series of seminars in U.S. cities as spokesperson for Karastan carpets. His big advice: Designing from the floor up is a good start.

“When they (his clients) don’t know where to begin, I tell them to start from the rug, in terms of colors and what sets the tone, whether classical or modern or whatever.”

And yes, he foresees having his own rug line (in addition to furniture and bedding), but not for a year or two.

Designer Lepore said what appealed to her about designing rugs was that rug patterns have a longer shelf life.

As for the trend of fashion designers stepping into rug design, she said, it brings “a fresh eye” and new brands that will create more interest.

“In this day and age, people associate certain looks and concepts with fashion designers,” Rosenblum said. “It’s reaffirming to the consumer that the product has a point of view and they understand that point of few.”

Rosenblum said she suspects more fashion designers will introduce area rugs, and that’s a good thing. “It brings rugs to the forefront. They (the consumer) may not know who the manufacturer is. What they know is there’s a line by that designer. It takes the business to a whole new level.”

By: Fran Golden – For The Associated Press

Discover our collection of designer rugs

For Love of French Deco Rugs