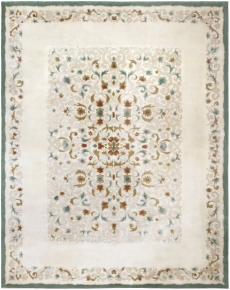 The names of many of those who played an important role in the development of carpet weaving are lost to history or were never even known to it in the first place. During the ancient period, the craftsmanship of a particular weaver, whether professional artist or nomadic homemaker may have added to the store of knowledge over time but their names were not likely known far beyond a day’s walk of their homes. In modern times there are some distinct personalities who changed rug designing forever. Paule Leleu is certainly one of them.

Daughter of the famous French designer and sculptor Jules Leleu, Paule replaced Da Silva Bruhns as the chief rug designer in her father’s carpet business. She made a sea-change in the design of rugs. She is considered to have been one of the best rug designers of her age. She gave a whole new dimension to rug and carpet design. You will find her creations rich in colors and figures. She would use simple color schemes at one end and highly sophisticated ones with a pattern on the other. She designed both handmade rugs as well as commercial design for larger scale production.

Her rugs are now considered among the best in the world. They are in huge demand on international markets and have their lovers all across the globe. Fall in love with one yourself. Check out our selections.

Do Blue: Rugs and Rooms with Trendy Ocean Vibes