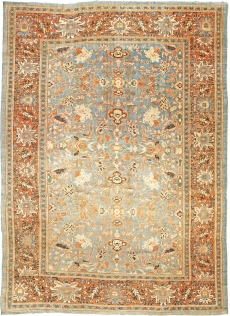 Sultanabad, now known as Arak, is a major rug producing city in modern day Iran. Founded in 1808, this city became a major center of rug production in Persia. The carpets produced in this region are considered to be of the best quality, typical known as Mahal productions. This type of rug was also produced in Mushkabad, Sarouks and Farahans. The Mushkabad rugs were similar to that of Sultanabad rugs but Sarouks and Farahans rugs were entirely different from them .

The rugs produced in Sultanabad are typically coarser than Sarouk rugs. These rugs carry unique designs compared to their Persian peers using bolded patterns in soft palettes. Sultanabad rugs were extremely popular in international markets. Even now, European and American Oriental rug markets are dominated by these rugs.

An unusual twist to the Sultanabad rug industry occurred in the 19th century when the Anglo-Swiss firm, Ziegler & Co., started manufacturing Sultanabad style carpets in Manchester, England. Their goal was to produce Sultanabad rugs to meet the increasing western market demand. This occasioned a change in the design of these rugs to meet western sensibilities. Now these rugs were manufactured with larger patterns and increased dimensions to suit western room sizes. In a marketing move to appeal to the tastes of American and European housewives, the color palette of Sultanabad rugs was softened.

From a design perspective you will find Sultanabad rugs making heavy use of vine scrolls and palmette motifs. The authentic primary color of these rugs was deep rose red. To this day, the market for these rugs is very dynamic and there are all sizes of Sultanabad rugs available to suit your interior decorating needs.