Craftsmen from the city of Tabriz are well known for their great talent . Persian rugs created by them are worthy of kings and some of them did found their way to various courts and palaces around the world. Traditional Tabriz rugs are widely known for their diversity, comparing to other types of Persian rugs. They can range from flat to pile weaves. Patterns of Tabriz rugs can feature not only traditional Persian motifs, but sometimes also fully-fledged reproductions of famous works of art.

Beauty of this traditional classic rug lies not only in its design, but also the care put into it.The main field features an allover floral motif, containing various types of flowers, vines and leaves. The whole is bordered by a skillfully designed frame.  Color palette of this piece was composed using mostly subdued hues, such as beiges. However, a bit of black and beige used to give this antique Persian rug more depth allowed it to create a wonderful contrast between light and dark colors.

Doris Leslie Blau’s collection of high quality antique rugs and modern carpets contains some of the most beautiful pieces in the industry. Often featured in interior design magazines, such as Architectural Digest or Elle Decor,  those rugs are gems waiting to be discovered by you, so don’t wait!

Doris Leslie Blau carries an exceptional collection of original modern rugs in many styles and materials. Contemporary hand-made rugs are a bridge throughout history, they are the fruit of the constant evolution of the weaving craft that has accompanied men since the dawn of civilization.

Antique Rugs by Doris Leslie Blau
rated by 5/5 by 79reviews
5/ 5stars
"The perfect rug!" by
DLB Customer
, I strongly recommend this Doris Leslie Blau Collection Contemporary Tabriz Beige, Brown Wool Rug to all interior designers. You will love it! 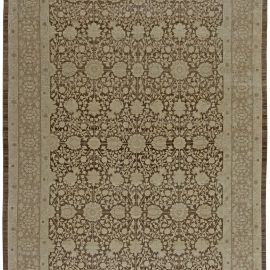