This extraordinary Tibetan rug was created by an extraordinary woman. Sheila Bridges is widely considered one of the best designers of all times. No wonder that her project impresses and enchants with its ingenious pattern. Thanks to the clever application of colors, the main field seems to be three dimensional. Muted green, pastel blue and light grey create a mesmerizing optical illusion, making us believe that the pile is formed of multiple cubes and their arrangement seemingly changes depending on how we look at them.

This geometric play of hues is enclosed within the borders adorned with a curvilinear braided ribbon, evocative of Celtic design. The off-white and burgundy present on the borders complement and invigorate the toned color palette. This contemporary red carpet designer gowns was thoroughly hand-made of the finest wool according to traditional weaving techniques in order to fully reflect the brilliant nature of Sheila’s project. Such qualitative execution ensures the carpet’s firmness and longevity. It is a valuable utilitarian object, but most importantly a piece of modern art that has a chance to please the eyes and hands of its owners for generations.

The Tibetan carpet industry experienced it heyday between the 19th and 20th century, only to fall into serious decline in the second half of the 20th due to the political unrest and torment. Many of the aristocratic families who formerly managed the workshops fled to India and Nepal during this period, along with their money, techniques and expertise. The revival of Tibetan rug weaving began in the 1970’s but rather in Nepal and India, hence the category of Nepalese Tibetan designer bathroom rugs also known as Nepal rugs.

Doris Leslie Blau carries an exceptional collection of original modern rugs in many styles and materials. Contemporary hand-made rugs are a bridge throughout history, they are the fruit of the constant evolution of the weaving craft that has accompanied men since the dawn of civilization.

Antique Rugs by Doris Leslie Blau
rated by 4.9/5 by 82reviews
4.9/ 5stars
"The perfect rug!" by
DLB Customer
, I strongly recommend this Doris Leslie Blau Collection Modern Geometric Tibetan Rug by Sheila Bridges to all interior designers. You will love it! 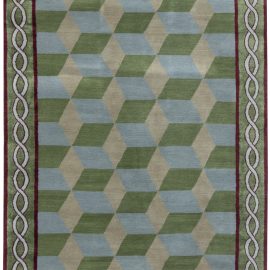