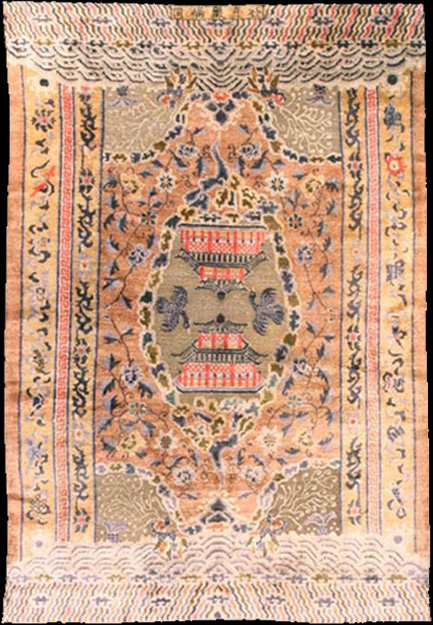 Throughout time, the powerful and prosperous, the good and the great, merchants and kings alike, have surrounded themselves with the trappings of wealth and success. The sovereign of a conquering army would be presented with the plunder of war and in more recent centuries, the spoils of trade.

Throughout time, the powerful and prosperous, the good and the great, merchants and kings alike, have surrounded themselves with the trappings of wealth and success. The sovereign of a conquering army would be presented with the plunder of war and in more recent centuries, the spoils of trade.&nbsp, Cleopatra was flattered with diplomatic gifts of Roman pearls, and Queen Victoria was fawned upon with Indian rubies and African diamonds. So, through the centuries do the precious trinkets of distant cultures travel the globe and become the trophies of other countries.&nbsp, Nothing has changed in 2011: yesterday’s King is today’s internet billionaire or oil baron, his castle is a super-yacht and his estate is a Manhattan penthouse, but he still wants to collect the best, the rarest and the most costly of possessions. It is this thirst for the sublime that drives the top-end of the international art and antiques market to ever more dizzying heights. While traditional money markets founder and fail, the prices for the best paintings, the best jewelry, the best furniture and the best antique carpets continue to rise as examples of such exacting quality become harder to find.

Each motif represents a positive concept:

Collectors will always attach a considerable premium to those pieces that have been associated with or made specifically for royalty, be it the tapestries of Louis XIV, the Faberge’ eggs of the Romanov Czars or the diamond bracelets that once belonged to Edward and Mrs. Simpson.

The present late 19th century carpet has excellent Imperial provenance. The woven inscription suggests that it was woven specifically as a furnishing for the “Hall of Protecting Harmony”, the third hall, (northernmost) in the outer court, in the former ‘Purple Forbidden City” palace complex of the Ch’ing dynastic capital at Peking. The Hall of Protecting Harmony (Pao-ho Tien) was built in 1627 and was used for Imperial audiences. This was also the reception hall where the Emperor received scholars who had acquired the highest degree through examinations.

The design is inspired by Buddhist motifs and depicts a central medallion with reversed twin pagodas, above which is a bird in flight. Around the medallion is a leaf and cloud pattern, set in a field of stylized flowers. In each corner is a lobed spandrel containing a carp-dragon. These animals are swimming in the waves of the water, mountain and cloud end borders. Stylized bats (fu) are also seen in the waves. The inner side borders have stylized lotus bands and continuous fretwork designs while the major borders display the eight Buddhist emblems of happy augury: the wheel of law, the conch shell, the umbrella of state, the canopy, the lotus flower, the covered vase, the pair of fishes and the endless knot. Each corner is anchored by a pearl, one of the ‘eight precious things’.

This harmonious detailing is rendered in sumptuous cut silk pile contrasting with flatwoven areas of silvered brass foil wrapped on a silk core giving a herringbone effect: a dramatic display of precious materials of great value.&nbsp, The Chinese culture is synonymous with silk. For centuries, its people were known as the Seres, ‘the silk people’ and are credited with being the originators of sericulture. Legend has it that Empress Hsi-ling Shih taught her people the art of silk production before 2598 B.C. She was later deified and worshipped as the Silkworm Goddess, and each Spring, until the very end of the Qing Empire in 1910, the current Empress and her court ladies honored her legacy by enacting an elaborate ritual within the Forbidden City complete with sacrifices, processions and a symbolic first feeding of white mulberry leaves to the New Year’s crop of silk worms.

Chinese silk and metal thread carpets have long been objects of great fascination with their American and European audience, they are expressive tokens of the exotic luxury of the Chinese dynasties of days past. The carpet is almost identical to one made for ‘Use in the Hall of Annual Prayer’ from the Collection of Lady Sonia and the late Sir George Binney of Jersey, the Channel Islands, that was included in a seminal exhibition of Imperial Carpets from Peking in 1973 at the University Art Gallery of Pittsburgh and the Duke University Museum of Art, Durham, North Carolina (see pl.7). Carpets such as these are found in many of the major museum collections around the world including the Metropolitan Museum of Art, New York. 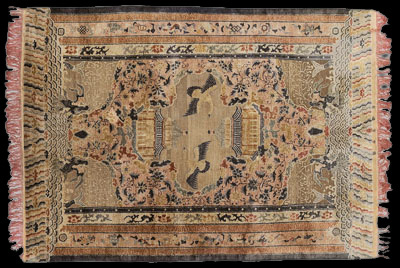 After the financial crisis of 2008, sales of luxury goods grew an impressive 10% worldwide in 2010but a staggering 30% in China, where the economy continues to develop rapidly. This spectacular expansion is mirrored in the cost of objets d’art of particular interest to the Chinese market, such as this Imperial carpet. After years of fairly static prices for this group, in 2006, a similar piece sold at Christie’s auction house in New York for $13,200 (12th December 2006, lot 104), then in November of 2008, just after theCrash, when auction prices were in freefall, another rendering of this design brought $64,657.38 (£40,850) at Sotheby’s in London (5th November 2008, lot 174). 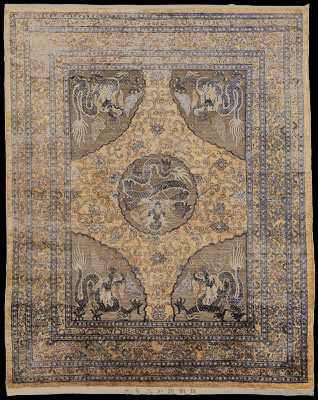 Most recently, on the 8th January of 2011, a third carpet formerly in the collection of the owners of the Chinese trading firm of Russell &amp, Co., the largest trading house in China from 1842 until its closing in 1891, was offered at Brunk Auctions in North Carolina where it realized a staggering $140,000 against an auction estimate of $15 – 20,000. Lot 102, another Chinese silk and metal-thread rug in the same auction, sold for a hammer price of $180,000. The rarity and relative fragility of such carpets ensures that this upward trend is bound to endure, and as Chinese buyers continue to buy back and repatriate their lost heritage and to invest in their own cultural patrimony, the monetary value ofthese rugs will finally begin to reflect their intrinsic artistic value. 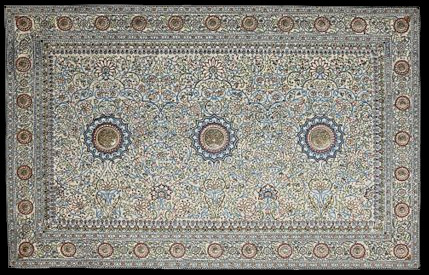 In general, Chinese carpets seem to be undervalued.&nbsp, It is a matter of when, rather than if, the prices for Chinese production match the recent world record shattering results for Indian (The Pearl Carpet of Baroda, Sotheby’s Doha, Qatar, 19th March 2009, $5,458,500) and Persian rugs (the Be’hague Kirman ‘vase’ carpet, Christie’s London, 15th April 2010, $9,599,535).

The finest antiques are effortlessly modern and always relevant. The great connoisseurs have always been eclectic in their collecting habits and the greatest contemporary interiors reflect this diversity by placing seemingly unrelated pieces together to achieve a sophisticated and layered harmony:&nbsp, a 1920s chair beneath a 15th century Russian icon and a Damian Hurst butterfly painting with a contemporary Italian sofa on a 17th century Persian carpet alongside an 86 inch flat screen TV. This is big game hunting for the urban sharp-shooter without the severed animal heads and the elephant foot ashtrays. It is trophy decorating for the global-chic. Whether this important carpet will grace a metropolitan interior or an Asian museum, it will continue to bring great pleasure and good auspices to those who are fortunate enough to admire it.