Within our new and custom Traditional Rugs collection we have a broad selection of Samarkand rugs generally made in unusually large sizes. Sumptuous in nature and appearance some of our Samarkand rugs are woven with recycled strands of wool from early central Asian Kilims. This eco-friendly blending of the old with the new conveys a sensual quality of the color and the weave that is unique within the rug industry.

To incorporate an antique into a contemporary interior takes flair and imagination. To assimilate an oriental antique into a western design demands daring and wit and to integrate an exotic oriental antique into a familiar setting takes a designer of singular talent and with the lightest but surest of touches. The rugs of the oasis towns of East Turkestan are incomparable. These exotic weavings from the oases towns of Kashgar, Yarkand and Khotan in the Chinese occupied Autonomous Region of Sikiang are collectively known as Samarkands. Typically, they are of long and relatively narrow format with simplistic and spacious designs rendered in glossy wool and sometimes in richly brocaded silk and metal-thread. The unusual rugs of Central Asia display themes from many cultures including China with fretwork borders, lotus blossoms and cloud-bands India with the swastika denoting infinity Turkey with bold reciprocal borders and carnations and Persia with floral trellis work. Traces of Buddhist symbols abound with the use of red signifying the sun and the realm of the senses, Samsara, with the blue medallions or roundels being the spiritual as well as the night, and their roundness a representation of the moon. The common placement of three medallions may represent that of a Buddha and its flanking Bohisattvas on an altar. The use of a stylized cloud or archaic rams’ horn pattern in many borders is a combination of the mundane and the spiritual with the clouds being a celestial sign and the horns reflective of the earth and the powers of darkness. Perhaps the most evocative of all of the East Turkestan motifs is the pomegranate that signifies prosperity and fertility. Sassanian representations, Western mythologies and Islamic geometries commingle within the Buddhist leaning Samarkand repertoire. Woven at the crossroads of many civilizations it is fitting that these rugs should employ such rich and varied symbolism. Samarkand is history’s definitive melting pot and its carpets are the ultimate expression of global multiculturalism.

Today Samarkand is the second largest city in Uzbekistan and is mainly inhabited by Persian-speaking Tajiks. Despite continuous political and economic upheaval, Samarkand continues to conjure up a mirage of romantic exoticism and has inspired many artists with appearances in the stories of One thousand and One Nights to the journals of Marco Polo written in 1298. As an icon of 20th century literature it has featured in Edith Wharton’s The Age of Innocence Angela Carter’s, The Kiss and Iris Murdoch’s The Nice and The Good. The city is referenced throughout popular culture, from the 1945 Hollywood film classic It’s a Wonderful Life to Monty Python’s Flying Circus in 1969. In 2001, UNESCO inscribed the 2750-year-old city on the World Heritage List as Samarkand -Crossroads of Cultures. Samarkand: a fragile yet vital pulse, woven at the junction of several civilizations, testimony to the power of invention, even within the confines of age old conventions. A serpentine line of beauty as singular as the Silk Road itself. An exotic new concept has been brought forth. A selection of Samarkand rugs in unusually large sizes, sumptuous in nature and appearance have been woven with recycled strands of wool from early central Asian Kilims. A sensual quality appears to the viewer in the nature of the color and the weave because of the beauty of combining the old with the new.

An Exceptional Collection of Traditional European Inspired Carpets for Sale 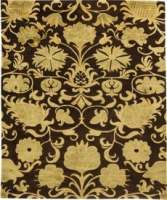 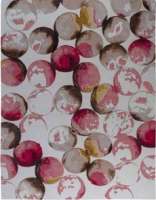 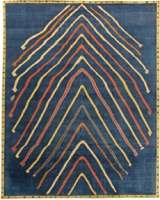 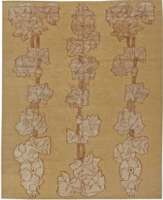