Since the thirteenth century, when Marco Polo admired their skill while traveling through South-Central Persia, the Persian rug weavers of Kirman have been highly respected. Blessed with an ample supply of very high quality local wool, known as Carmania wool, the craftsmen of Kirman have been weaving their way to the top of the carpet world by virtue of their craftsmanship, wide range of designs, broad palette of available Kerman Rug colors, immense tensile strength, abrasion resistance, and expert color combinations.

Colors of the Kerman Rugs can range from ivory, blue and magenta to a more golden and saffron cast.

As unique as their designer, no two Kerman rugs are precisely alike. Because of the tremendous demand for Kirman rugs, and because of the complex demographics of those generating the demand, a surprising variety of styles and designs were produced. While some Kirman rugs were woven explicitly for moneyed buyers from the West, there were also local consumers which only added to the diversity of the Kirman rugs. This diversity is seen in the range of motifs which can range from well-known and original Persian motifs to western motifs; striped and repetitive motifs, vase, Toranj (Citron), symmetric, garden, animal shapes, and pictorial rugs.

During the sixteenth century, Shah Abbas I reportedly gave antique Kerman Rugs embroidered with gold and silver thread as tribute to the Ottoman Court. The fame of these oriental weavings rapidly spread across Western Europe. From the mid sixteenth century through the eighteenth century, the city of Kirman was celebrated for ‘vase’ carpets, a term deriving from the depiction of vase motifs in many examples woven there. By the nineteenth century, Kirman was recognized for exceptional oriental rugs in the best Persian tradition.

Antique Persian Kirman carpets of this period, especially the Lavar group woven in the town of Ravar, are known for their fine weave, delicate drawing, incomparable range of color, and are still much in demand today. Very advanced relative to their fellow countrymen, Kirman weavers had learned to set their looms so that the cotton warps were on two different levels. They then threaded the wool wefts, leaving some tight and others sinuous, giving an immediately recognizable wavy finish to the carpet. The design patterns were also distinct. Vase carpets, unique to Kerman in the 16th and 17th centuries, were characterized by an allover pattern of stylized flowers and oversized palmettes with vases placed throughout the field.

An Exceptional Collection of Kirman Carpets for Sale 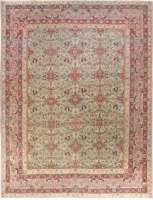