This mid-century vintage French European deco rug is a reproduction of a rare Picasso design titled “La Serrure.” Rendered in shades of black, green and red, the design (translating as “The Lock”) is from the edition of three published by Edition Cuttoli and Galerie Lucie Weill in Paris. Woven by Marie Cuttoli, who has translated to textile the works of such artists as Poliakoff, Klee and Matisse, this thick woven wool antique carpet is a striking work of art. Pablo Picasso, the Spanish painter, sculptor, printmaker, ceramicist, stage designer, poet and playwright is inarguably one of the greatest and most influential artists of the 20th century, as well as the co-founder of the Cubist movement. The anxieties and tribulations of modernity that touched so many of his works can be glimpsed here, in the mysterious dark figure seen approaching through a key hole.

Doris Leslie Blau is proud to be in possession of an incredibly vast collection of antique carpets and vintage rugs for sale which will please the eyes and the hands of even the most demanding connoisseurs. 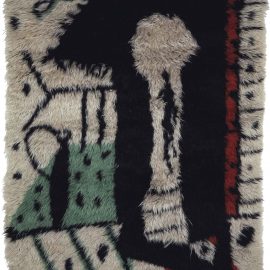